Gamers hoping to see how the third chapter of the Mega Man Legends series would unfold on the Nintendo 3DS will be sorely disappointed. According to a recent announcement at Capcom's official website, Mega Man Legends 3 is officially cancelled. The notice states that the project did not reach certain conditions to proceed with further development.

Additionally, the upcoming "prologue" demo that was supposed to be out in June has also been scrapped. The official development blog will close on August 19, with no further updates being planned as of today. No further details were given as to what the conditions were, nor was there any mention of former Capcom research & development head Keiji Inafune, whose name was synonymous with the project and the Mega Man franchise.

According to a recent post and FAQ on the Capcom Unity blog, there are no current plans to restart the project in the future. Players who have been in contact with people on the blog's "Dev Room" will still remain open in limited capacities so that they can establish further inquiries with each other in the future.

Mega Man Legends 3 was a follow-up to the past Mega Man Legends titles on the PS One. It was an action game, and Capcom invited gamers to influence the title's development by inputting ideas on the development blog and official site and also voting on character and robot designs. 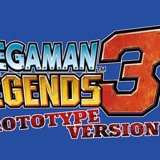