A new animated series based on Mega Man will launch in 2017, Capcom confirmed today alongside a few other details about the show.

The series is in the works at Dentsu Entertainment and DHX Media and is intended for "kids 6 to 9, as well as their parents who grew up loving the video games." Capcom first announced plans for the show in 2015.

The show stars Aki Light, an alter-ego of Mega Man who is described as "a normal, upbeat, schoolboy robot. When activated, his skin re-forms--in a flurry of computer code and visual pyrotechnics--into a suit of impenetrable nanocore armor, including the iconic Mega Buster arm cannon and helmet." You can see what he looks like in the image above.

Returning characters like Rush will make an appearance in the series alongside new additions, including someone named Mega Mini.

Man of Action Entertainment, the group responsible for Ben 10, Generator Rex, and characters in Big Hero 6, will executive produce the series.

"The best thing about Mega Man is his unflinching wide-eyed optimism and an over-the-top sense of humor," Man of Action's Duncan Rouleau said in a press release. "This show reflects both qualities. We've got it all in here, it's hopeful, forward-leaning, action-packed... It's full-on fun ahead!"

DHX's Asaph Fipke added, "We're very excited to be working with Dentsu on Mega Man. This is yet another deal born of our strategy of teaming up with leading companies on high-profile kids' brands that we can leverage across our platform of production, distribution, licensing, and broadcast. We see this as an excellent opportunity to build on the rich legacy of the Mega Man video game series and introduce the famous boy robot to a whole new generation of kids worldwide."

2017 marks the Mega Man series' 30-year anniversary. This won't be the first animated series in the show's history; two seasons of a show called Mega Man were produced in the mid-90s.

While past Mega Man games have continued to be re-released and Mega Man himself has made appearances in games like Super Smash Bros. and Street Fighter X Tekken, there haven't been many new Mega Man games of late. In fact, Capcom has canceled a number of games in recent years, including Mega Man Legends 3 and Mega Man Universe in 2011. On the bright side, Capcom did re-release the rare Misadventures of Tron Bonne on PSN last year. 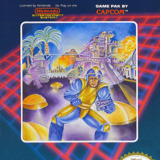