A game based on the comedy film Mean Girls will be released for iOS devices this week, Entertainment Weekly has reported. Named after film, Mean Girls will be set in North Shore High School's cafeteria, classrooms, and basketball court. In the game, players must stop a new clique from taking over a high school.

Based on the gameplay footage shown the game appears to adapt mechanics usually seen employed in the tower-defence genre. Several characters from the Mean Girls film make an appearance, including Cady Heron, Gretchen Wieners, Karen Smith, and Regina George.

The Mean Girls film made its debut in 2004. A game based on the movie was released for PC and Nintendo DS in 2009. 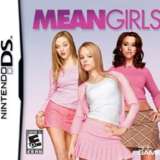