BioWare drops by the GameSpot offices to show off the latest build of MDK2. We have impressions and shots.

This week, BioWare dropped by the offices to show us the latest build of MDK 2. The game uses BioWare's Omen 3D engine, which will also provide the graphics for the upcoming Neverwinter Nights. MDK 2, as shown to us, looks good. The team says the game is still several months from shipping, but the game looked stable.

The major difference between MDK and MDK 2 is that in new game, you will also be able to play as Max the Dog or as Dr. Hawkins, in addition to playing as MDK hero, Kurt. Each has a different style of gameplay. Kurt uses his sniper gun a lot and requires more deliberation in negotiating game levels. Max, as a gun-wielding four-legged dog, simply runs through levels blowing up everything in sight. Dr. Hawkins is less forceful in his approach, and he is required to do more puzzle solving. MDK 2 has ten levels; each character is devoted to three levels, with the final level open to any character.

BioWare is now putting the finishing touches on the game. From what we saw, MDK 2 appears to have a variety of gameplay and the same humor and attitude of the Shiny-developed original. The game should ship sometime in early spring 2000. 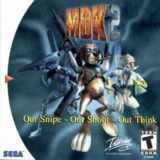