Star Wars Day is here, and there are a ton of great deals to snag to celebrate May the 4th.

Star Wars Day is more than just a day where you tell everyone you see "May the 4th be with you;" it's also a big opportunity for fans to purchase Star Wars products for discounted prices. The punny holiday has morphed into a massive sales event over the years, leading to promotions at nearly every major retailer. From games and Blu-rays to collectibles and apparel, a staggering number of Star Wars products are discounted each year on May 4. This year's celebration features a staggering number of great deals, including plenty of discounts on games and 4K Blu-rays, Nerf guns, fancy watches, a ridiculously cool R2-D2 projector, a Baby Yoda Fire TV and Echo Dot bundle, and much more. We've rounded up the best Star Wars Day deals, but you'll want to keep checking back throughout the day. May the Star Wars deals be with you.

Some of these deals would make for great gifts for Star Wars fans. With Mother's Day right around the corner, now's a great time to save on some cool Star Wars products. 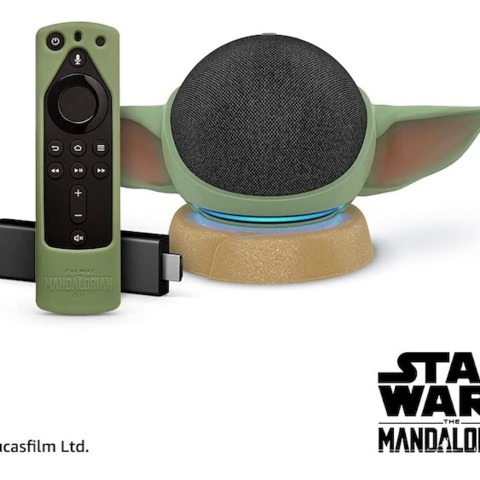 Available to preorder now to celebrate Star Wars Day, the Baby Yoda Fire TV Bundle comes with a 4th generation Echo Dot and Fire TV Stick 4K. Of course, it also comes with themed cases for the Echo Dot and remote. The Echo Dot case/stand is quite adorable. You can grab it for $109 today only, down from $143.92. Amazon will ship the Fire TV Stick, Echo Dot, and remote cover immediately, but the stand doesn't release until June 10. If you already have an Echo Dot, you can buy the Baby Yoda stand separately for $30. 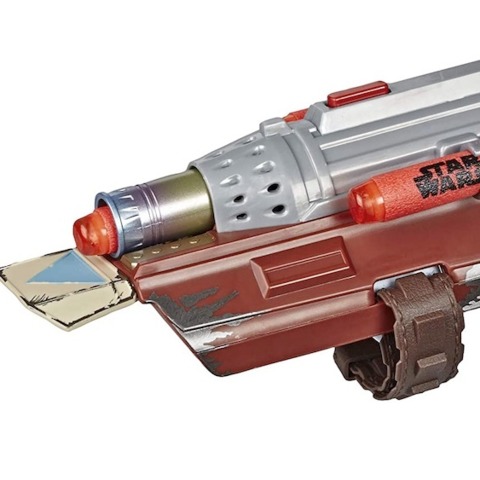 Mandalorian fans can pick up the Rocket Gauntlet Nerf gun for only $14 today only at Amazon. The gauntlet straps to your arm for stealth firing and comes with six Star Wars-themed darts. 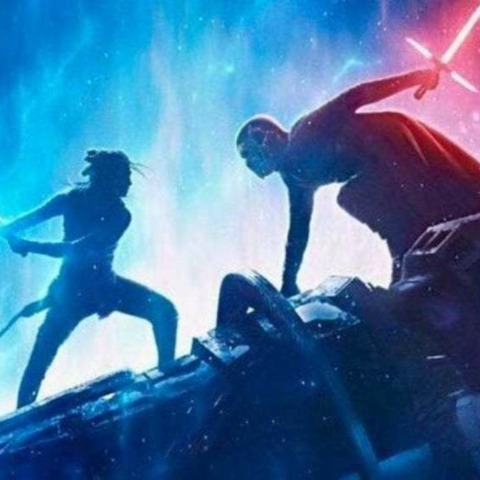 Amazon has some great deals on 4K Blu-rays of every mainline Star Wars film as well as spin-offs. If any of the movies sell out at Amazon, Best Buy has the same deals. 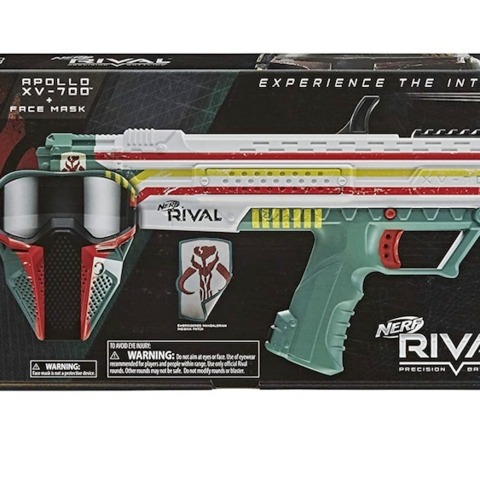 Boba Fett's Apollo XV-700 Nerf Blaster is discounted to $48 at Amazon today. In addition to the cool blaster and seven darts, you get a mask and a Boba Fett Insignia mask. We should note that this blaster is quite powerful and is only recommended for kids 14 and up. 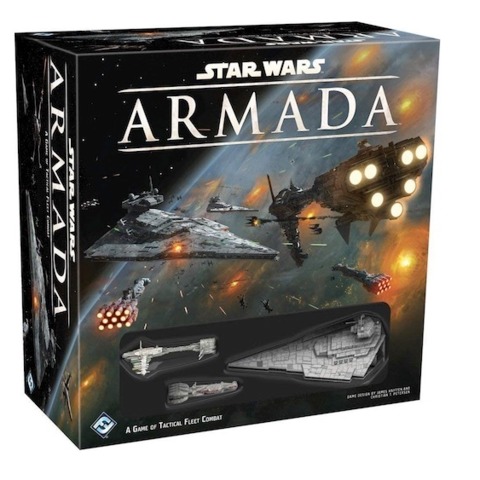 Star Wars: Armada is a two-player miniatures game featuring tactical fleet combat. The core set is on sale for $56 at Amazon. It comes with three capital ships, 10 unpainted fighter squadrons, and all of the cards and tokens you need to dive into this great Star Wars tabletop game. 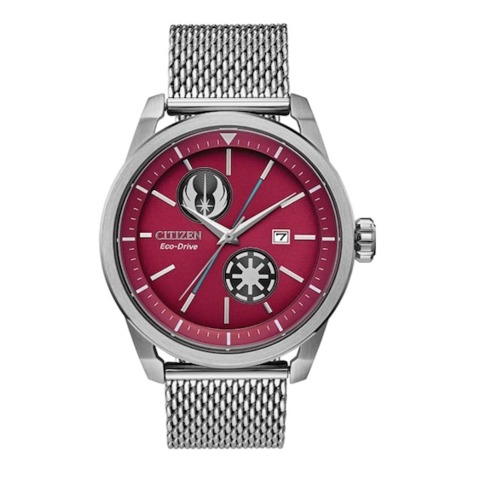 Citizen's high-end Celebrating the Saga Star Wars watch normally retails for $295, but it's on sale for only $188.80 today only. It features Jedi Order and Galactic Republic symbols on the front and the battle between Obi-wan and Anakin on the back panel. 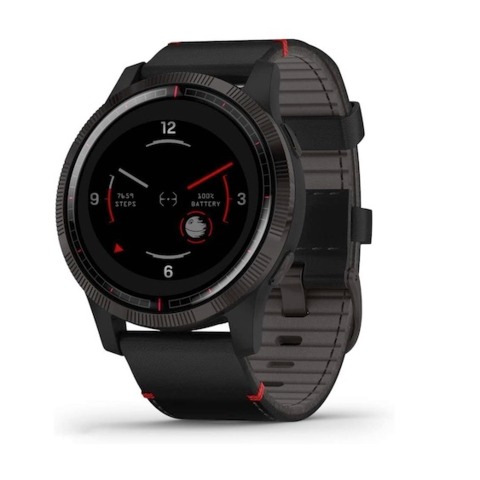 Garmin's Darth Vader-themed smartwatch is $100 off today only. It features a Darth Vader animations and avatars. Garmin's smartwatch has a bevy of useful features, including fitness tracking, music playback, and notifications when paired with your smartphone. 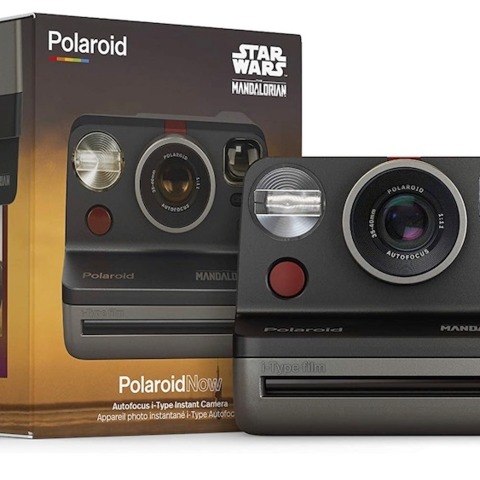 Polaroid Originals The Mandalorian-themed i-Type camera is on sale for $85 at Amazon today only. This camera instantly prints pictures, making it a cool gift for those interested in photography and Star Wars. The i-Type camera has an auto-focus feature to help you take quality photos. 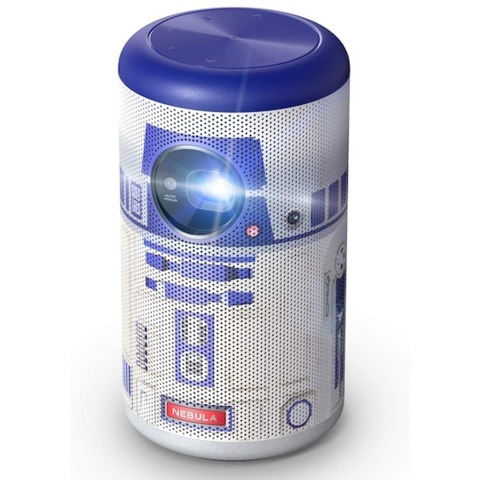 Anker's brand-new R2-D2 projector is on sale for $620 at Amazon with promo code WSMAY4TH. This limited-edition projector has an incredibly cool look and stellar performance. Equipped with Android TV, the projector has access to all of your favorite streaming apps. It can play in 720p resolution across a 100-inch space and has immersive built-in speakers (can double as a Bluetooth speaker). 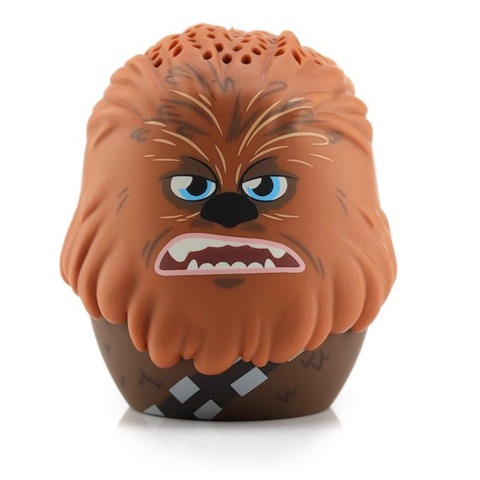 Although it may be strange to hear music instead of growls coming from a speaker that looks like Chewbacca, this Bitty Boomer is a great portable speaker for fans of the iconic Wookiee. It's small, but it packs a powerful punch and comes with a clip so you can easily hook it to your backpack for travel. 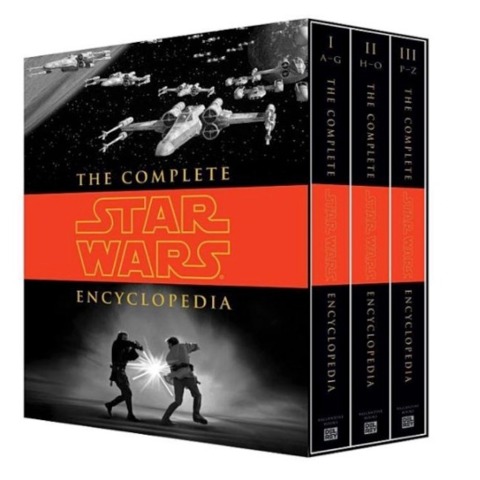 This would make a great gift for a diehard Star Wars fan. Star Wars - Legends: Complete Encyclopedia comes with three hardcover books totaling 1,224 pages. The encyclopedia covers a huge assortment of Star Wars media, including the movies, games, comics, books, and everything in between. It's on sale for only $81.19 at Walmart, down from $150. 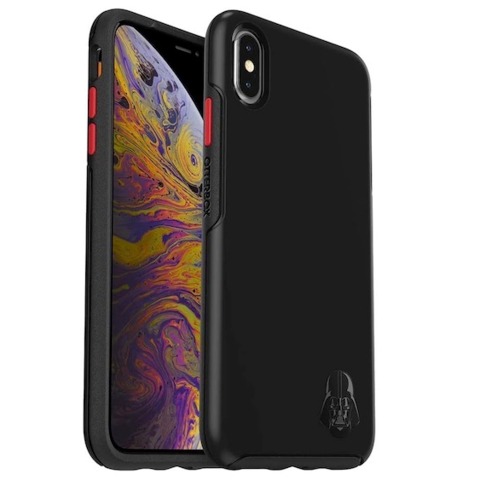 See at Amazon
See at Otterbox 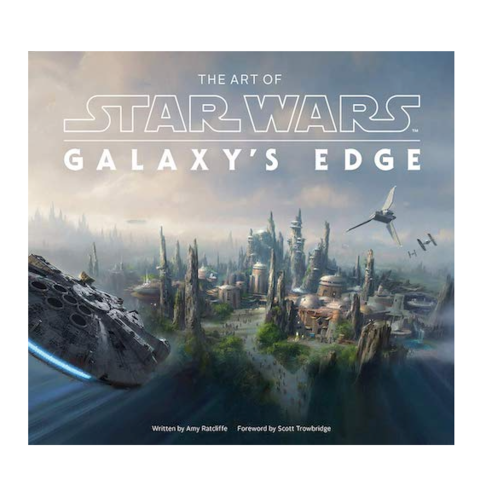 Star Wars and Disney fans will find much to love in this newly released book. The Art of Star Wars: Galaxy's Edge is all about Disney's new Star Wars theme park. The 256-page hardcover gives enthusiasts an inside look at the creation of Galaxy's Edge, from blueprints and sketches to concept art and photographs. Amazon has the book on sale for $37.54, down from $50. 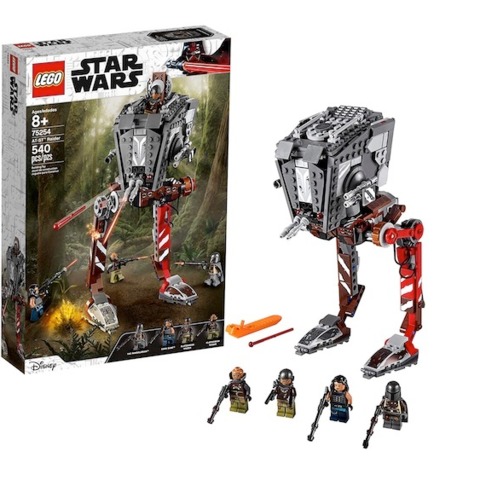 Fans of The Mandalorian can pick up this cool AT-ST Lego set for $10 off at Amazon. The 540-piece kit comes with four minifigures, including Mando. The AT-ST has posable legs, two shooters, and a movable turret. 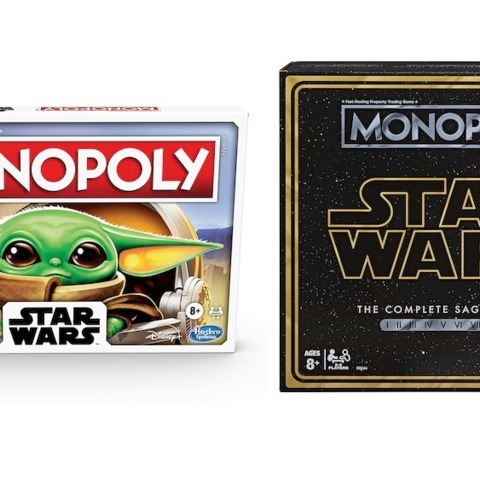 Hasbro has released a bunch of different variations of Monopoly revolving around Star Wars. One of the most recent editions stars Baby Yoda (The Child). Baby Yoda Monopoly lets players use Baby Yoda tokens to move around the board and acquire objects the little guy gets throughout his adventure in the show. It's on sale for $10.87 at Amazon, down from $20.

You can also save on the Star Wars Complete Saga Edition of Monopoly at Amazon. Normally $30, it's on sale for $20 right now. This iteration features locales and characters from all nine mainline movies. 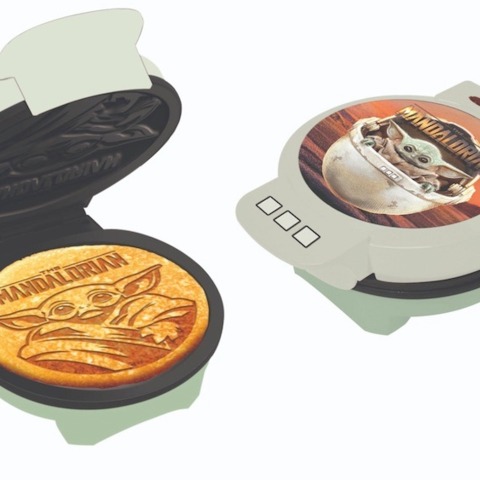 Exclusive to GameStop, this Baby Yoda waffle maker imprints a picture of the cutest baby in the galaxy on your waffles as well as brownies, cakes, quesadillas, sandwiches, and more dishes. It's on sale for $34 right now at GameStop. 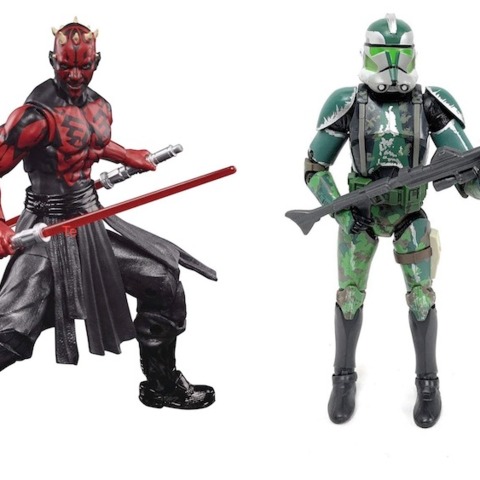 GameStop's sale features plenty of Black Series action figures and collectibles for 15% off. We've highlighted some of the notable Black Series deals below: 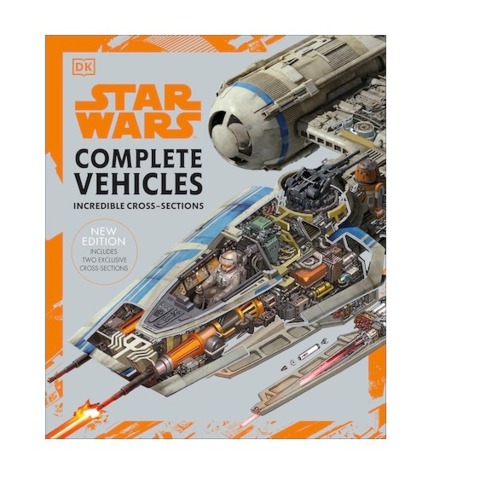 Star Wars is beloved for many reasons, including the extremely cool ship and vehicle designs featured in the Skywalker Saga. Star Wars Complete Vehicles is a book for those who want to learn more about the intricately designed ships that zip across movie screens. This hardcover book has an incredible amount of detail, breaking down the vehicles piece by piece with both artwork and written descriptions. Amazon has Star Wars Complete Vehicles discounted to $24. 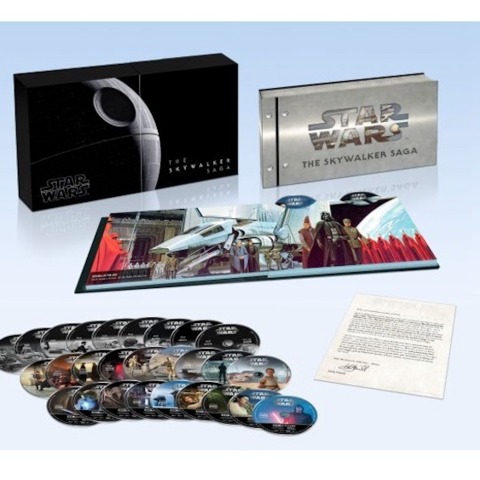 There's no better way to watch the Skywalker Saga than in 4K UHD Blu-ray, and ultimate Star Wars fans would likely appreciate this box set. Best Buy's Star Wars: The Skywalker Saga box set includes a whopping 27 discs. There's 4K Blu-ray, Blu-ray, and special features discs for each of the nine movies. The discs are stored inside a fold-out case featuring Star Wars artwork. Normally $250, you can get the box set for $230 right now. 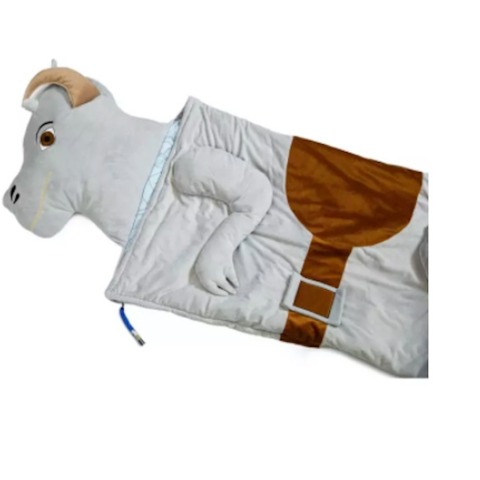 You get to look like a Tauntaun when sleeping in this bag, which makes it both incredibly funny and cool. The Tauntaun sleeping bag looks the part on the outside, but it really steps up its game on the inside fabric, which shows the creature's intestinal pattern. Of course, the Tauntaun's head is the pillow, so this is an all-in-one sleeping bag that's great for camping. Normally $100, GameStop will have it on sale for $50 starting May 2. 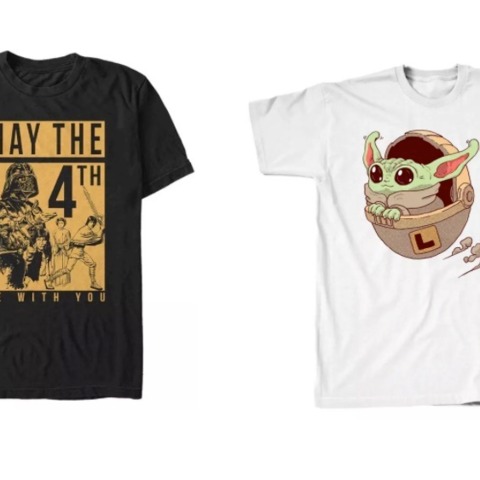 GameStop has select Star Wars T-shirts on sale for $10. The T-shirts normally go for $20, so this is a pretty darn good deal. You may want to purchase one size up; in our experience, GameStop's T-shirts tend to shrink when washed for the first time. 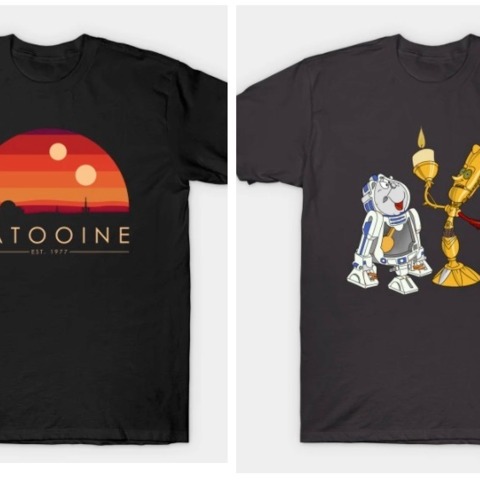 See all deals at TeePublic

Buy three, get one free 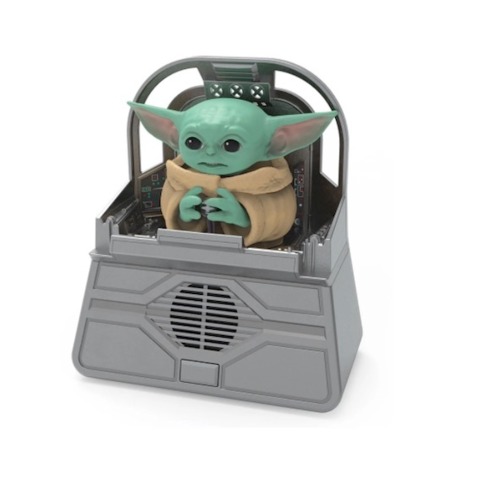 Just Geek's Star Wars Day sale is live now and features a wide variety of cool products. While nothing is discounted individually, you can get one product free when you purchase three items. The buy three, get one free promotion focuses on collectibles, apparel, home goods, and more. The adorable Baby Yoda product shown above is a dancing Bluetooth speaker--and yes, there are plenty more interesting items up for grabs. 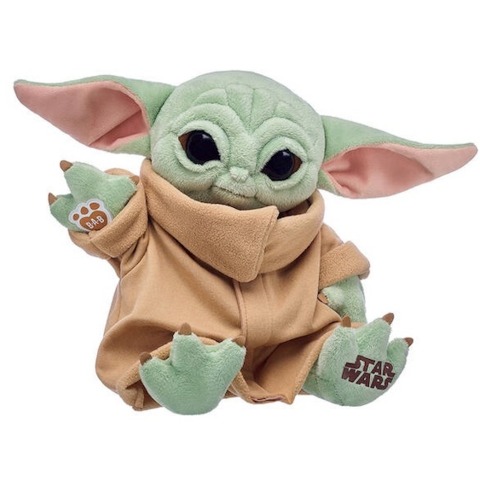 You can save 20% on the adorable Baby Yoda Build-A-Bear by using promo code FORCE20. The plush starts at $44, so you can get it for around $35 right now. 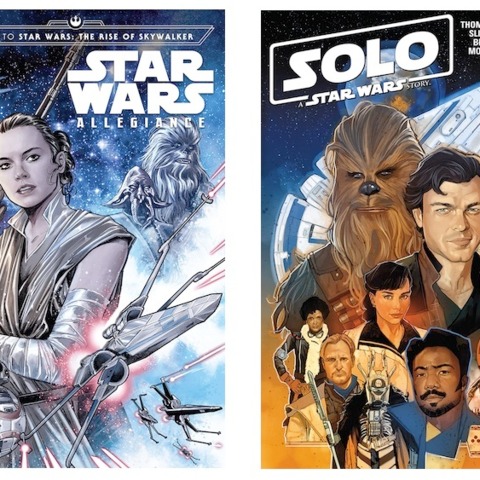 Comixology (an Amazon-owned company) has more than 80 digital Star Wars comics on sale for steeply discounted prices until May 6.

Get a Free Tatooine Homestead 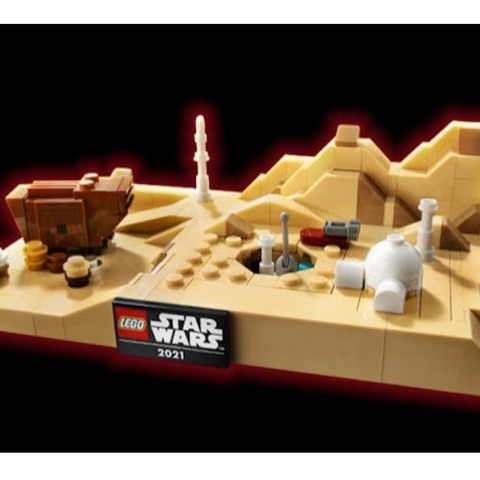 If you spend $85 or more at the Lego Store until May 5, you'll get a free Tatooine Homestead micro-build. It's a tiny kit, but it's a cool little collectible to have to remember where Luke's journey started. 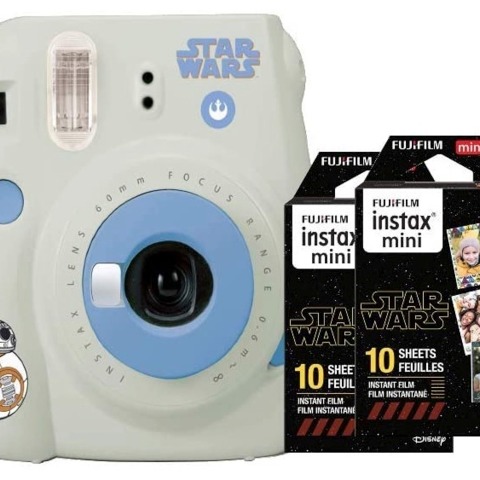 Today only, you can grab this cute Fujifilm Instax camera for $61. This Star Wars-themed model has a picture of BB-8 on the front and comes with two sheets of instant film. The Instax prints credit card-sized pictures that are perfect for your wallet. 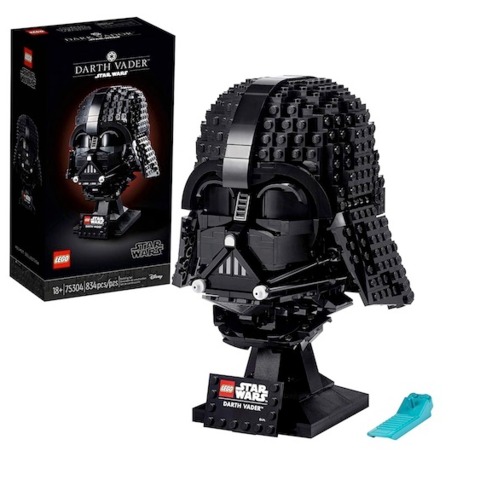 Though it's not discounted, the Darth Vader Lego helmet released just last week. The 834-piece set lets you piece together Darth Vader's iconic helmet. It's an intricate build filled with tiny details and flourishes, but it's also a really cool display piece. 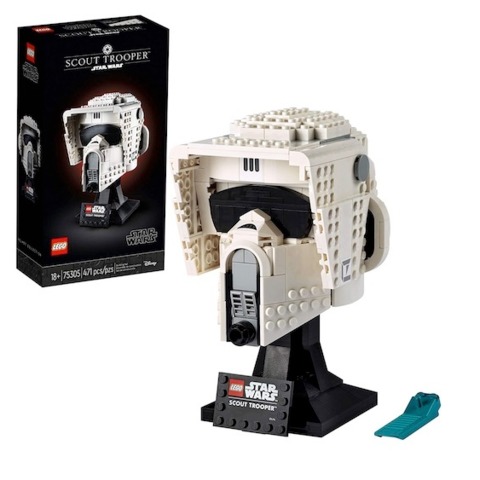 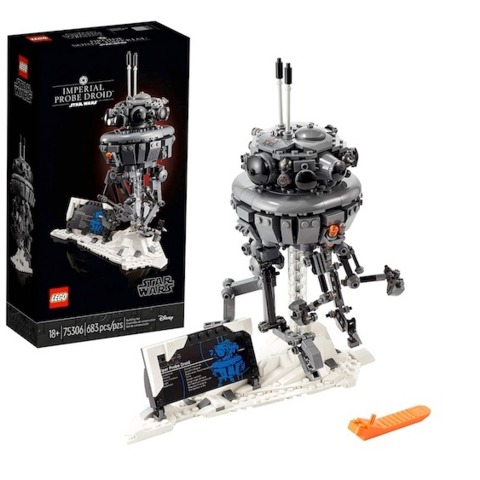 Lego also released a new set focused on the Imperial Probe Droid. This detailed build features 683 pieces and comes with a tiny display plaque with information on the droid hailing from The Empire Strikes Back.