Since the inception of the real-time strategy game, many gamers have proclaimed that the age of its turn-based predecessor has come to an end. Others hold that the quick mouse movements and attacks of games like Command & Conquer and Z are killing strategy gaming by rewarding the fast player, and not necessarily the thoughtful one. Instead of trying to appeal to one side or the other, Interplay has chosen a new approach to selling a strategy game to a divided audience - they've created a hybrid.

With M.A.X., the developers have created a strategy game that uses a turn-based, real-time control interface. That might sound a little off, but here's how it works: Each unit has a certain amount of terrain that it can cover and a certain number of times it can fire each round. During each turn (which lasts a preset amount of time, determined at the beginning of the game), players are basically playing a real-time strategy game, up to the limits of what their units can achieve in that round. It sounds complicated, but the end result is very easy to get your head around, and rather ingenious in the way it rewards skillful tacticians and strategists alike. Appropriately enough, the entire idea for the wargame came out of a series of fights.

"M.A.X. started with our fascination with real-time and turn-based strategy games," says Ali, the game's producer. "We kept arguing about which one was better, and out of that came our concurrent playing system."

So far, the story of M.A.X. takes place in the Earth's distant future, when nearly all of the planet's resources have been depleted. The remnants of humanity have been divided into eight groups which are using alien technology to explore and colonize other worlds. Each group has slight advantages in at least one aspect of warfare or economics, which should make those complaining about the unit similarity of games like Warcraft II or Civilization 2 very happy. Players spread their troops out over a global map, construct factories and habitats, and mine for gold, fuel, raw materials, and Monpol, a mysterious substance that the aliens just love. Players who collect enough Monpol will be rewarded by the aliens with random gifts, ranging from gold to special units that cannot be built by any player.

M.A.X. has plenty more to offer, from over 70 different units (which can be customized by the player) to full multi-player options. Even in its early development stages, the game shows plenty of addictive potential, besides providing an interesting new play format for enthusiasts to test their skills on. If you're in the market for a new strategy game (and according to recent sales of games, you are), this is definitely one to watch. 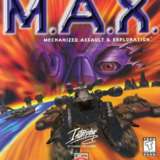