BioWare to launch upcoming space RPG three-pack for Sony's platform one month after debut on PC and Xbox 360.

The original Mass Effect never released for the PS3, but not only will Sony crowd get to play the game for the first time as part of the Trilogy, the title will also be available as a standalone download on the PlayStation Network.

The Trilogy includes the original Mass Effect, Mass Effect 2, and Mass Effect 3, and will be available at retail for $60. A price for the standalone Mass Effect game through the PlayStation Network was not announced.

BioWare also detailed what PS3 fans can expect in the way of downloadable content for the Mass Effect Trilogy. The company said the PS3 version will include the original Mass Effect's Bring Down the Sky content, while Mass Effect 2 will feature the Cerberus Network (which includes the Kasumi, Overlord, and Lair of the Shadow Broker content). Lastly, BioWare said Mass Effect 3 for PS3 within the Trilogy will be "exactly as it originally shipped." 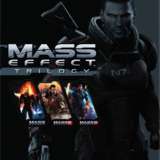