Marvel's Spider-Man PS5 Getting New Suits For No Way Home

This week Peter Parker can try on two new suits inspired by No Way Home in the PS5 version of Spider-Man.

Peter Parker can don a couple of new suits in Marvel's Spider-Man, as part of an update to match the upcoming Spider-Man: No Way Home theatrical release. The free update is coming on December 10, and will be available exclusively in the Spider-Man Remastered version for PS5.

The two suits can be seen in a trailer that integrates them into the cutscenes from the game. They appear to be the black-and-gold suit seen in various trailers, along with the new version of the red-and-gold suit. Some fans have speculated this second suit is a revision of the Iron Spider suit with some special enhancements from Dr. Strange, who plays a pivotal role in the upcoming movie.

The black suit bears a slight resemblance to another suit that Peter gets in the course of the Spider-Man story, which also had bright yellow highlights. That one was more sleek, though, as opposed to No Way Home's textured suit with gold highlights.

The trailer also includes scenes from Spider-Man: Miles Morales, since getting the Ultimate Edition of that game is the only way to get Spider-Man Remastered on PS5. The 2018 game has gotten suit updates before, including a batch of extra suits when it came to PS5 with visual upgrades. Miles Morales has gotten its own suit updates too, though not as many.

Spider-Man: No Way Home is coming on December 17, and the plot cracks open the multi-verse to include several villains from previous Spidey franchises.

Spider-Man has played with multiple realities before, most notably in the animated film Spider-Man: Into the Spider-verse, which even included a reference to Insomniac's game. We recently got our first look at that movie's sequel, Spider-Man: Across the Spider-Verse. 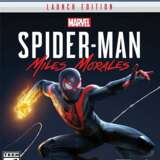