Crossover fighting game reaches milestone a month and a half after worldwide debut, tops Marvel vs. Capcom 2's total.

After an 11-year hiatus, Capcom's crossover fighting franchise returned last month with Marvel vs. Capcom 3: Fate of Two Worlds. The publisher today dubbed the revival a success, announcing that the brawler had shipped more than 2 million units worldwide.

While Capcom said that figure has already eclipsed the total of Marvel vs. Capcom 2, it puts the game significantly behind the pace set by another of the publisher's franchise revamps, Street Fighter IV. In February of 2009, Street Fighter IV--also the first new installment in its series in 11 years--shipped 2 million copies within 11 days of its Japanese launch (and just three days after its European debut). It took Marvel vs. Capcom 3 six weeks to achieve the same milestone.

Released in the US, Europe, and Japan in mid-February, Marvel vs. Capcom 3 pits comic book titans like Spider-Man, the Incredible Hulk, and Captain America against the publisher's own catalog of characters, including Street Fighter's Ryu and Chun Li, Resident Evil's Wesker, and Arthur from Ghosts 'n Goblins.

For more on the game, check out GameSpot's Marvel vs. Capcom 3 review. 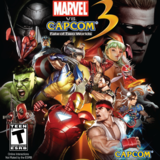