When you hear the words "comic books," two companies spring to mind: DC and Marvel. Despite having a checkered history--even declaring bankruptcy in the late 1990s--Marvel has become a financial powerhouse in the 21st century. The company's newfound success is mainly due to its immensely successful licensing operations. Spider-Man--Marvel's top property--spawned two of the biggest blockbuster films of all time, and the similarly popular X-Men was the basis for a pair of hit films as well.

For an even longer time, Marvel properties have been the basis for successful video games. Activision and Treyarch's Spider-Man 2 was the best-selling game in America in June, and the multiplatform title remains a presence on the charts. X-Men Legends received solid reviews, although its success on the charts has yet to be determined.

Given the tens of millions of dollars flowing into Marvel's coffers from its licensing arrangements, it should come as no surprise that it would defend said deals zealously. Perhaps overzealously, since, according to the Associated Press, Marvel is suing publisher NCsoft and developer Cryptic Studios for copyright infringement.

The subject of the legal action is City of Heroes, NCsoft and Cryptic's massively multiplayer online role-playing game. Marvel is claiming that the character customization functionality in City of Heroes allows players to create superheroes that closely resemble trademarked Marvel characters. According to the AP, Marvel singled out a "mutant-based" clone of X-Men member Wolverine and "a gigantic, green, 'science-based tanker'-type hero that moves and behaves nearly identically" to the Hulk.

Of course, the suit didn't mention the retinue of original, often crazy superheroes that players can create in City of Heroes, such as: the Defender, named after former Surgeon General C. Everett Koop, who resembles a cross of Captain America and a bondage S&M fetishist; the Defender "Fruity Samurai," who sported Japanese-style armor and a giant yellow heart on his chest; and the feared Due Process (pictured), "a lawyer on steroids."

If the suit makes it to court and Marvel wins, it could potentially be very bad news for the game industry. According to the Associated Press, this is the first time a game company has been sued over player-created, in-game content. If Marvel wins, it may set a legal precedent that could hold developers and publishers responsible for player-created content, which could lead to a drastic reduction of creative in-game options for gamers.

However, some industry watchers have hinted that Marvel may have an ulterior motive for the suit, since it is rumored that as part of the company's efforts to increase its presence in the games arena, it is planning a superhero MMORPG of its own. However, Marvel reps could not be reached for comment as of press time. 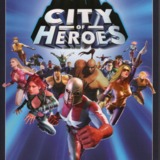