Despite diversifying its offerings over the years, the heart of Comic-Con International: San Diego remains comics and the superheroes (and villains) that define them. In honor of this year's Comic-Con (which wraps up this weekend), EA announced today it would be bringing an as-yet-unnamed original fighting game featuring the Marvel license to the Xbox 360 and PlayStation 3 in 2008.

No stranger to the fighting genre, Marvel's superheroes have been featured in several 2D and 3D fighting games, including the Marvel vs. Capcom series and EA's own Marvel Nemesis: Rise of the Imperfects. Never ones to shy away from a dustup, EA's Chicago studio will develop Marvel's latest fighting game. EA Chicago's most recent credits include the hip-hop rhythmic brawler Def Jam: Icon and the sweat-glistened boxing sim Fight Night Round 3.

Details on the game were not specified, but EA Chicago's effervescent general manager and vice president Kudo Tsunoda did say that the game would feature "a great all-star lineup of Marvel Super Heroes and Super Villains with incredible powers that are authentic to the fiction, huge environments, and a living world that keeps the gameplay fresh; every battle will be unique, every battle will be like a first edition."

For more from Comic-Con 2007, check out GameSpot's ongoing coverage. 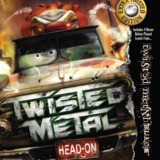