We talk to EA on the eve of the official announcement of its upcoming fighter set to feature Marvel Comics characters.

Marvel Nemesis: Rise of the Imperfects is the upcoming 3D fighter from Electronic Arts that was announced over one year ago. Details have been scarce on the game since word of its existence started trickling out, which led it to be christened "Marvel vs. EA," a catchier-sounding title than "unannounced fighting game featuring Marvel and EA characters." EA and Marvel have both been silent while comic and fighting game aficionados commiserated on the Internet as to whether the fighter would be the best or worst game ever. Speculation peaked as visions of the cast of SSX and visions of the Need for Speed cars facing off against Spider-Man, the X-Men, and the Avengers danced in everyone's heads.

Rather than work ourselves into a frenzy, we simply went to the horse's mouth and asked line producer Dan Ayoub of EA's Canadian studio, where the game is currently in development, what the deal was. While he wasn't able to let the cat all the way out of the bag, he was able to shed some light on what the game is all about, as well as whether or not you can expect to be dodging fireballs from tricked-out street racing vehicles or countering fierce snowboard attacks from Kaori (the short answer is: no).

GameSpot: Why a fighting game?

Dan Ayoub: We wanted to revitalize the fighting genre with an authentic superhero fighting experience that no one has experienced before. We were really excited about the opportunity of working with Marvel because they have a great lineup of superheroes that has successfully made the transition to feature film in spectacular ways, like Spider-Man and the X-Men. We want to do the same thing for their characters in the fighting genre. Superheroes and fighting games seems to be a natural fit, because that is what everyone loves to see in the comics and in the movies. Nothing beats seeing these incredibly powerful characters just trashing each other.

DA: We wanted to really deliver on the feeling of being a superhero, and that means full, uninhibited 3D! The player will not be limited to one plane upon which to fight. These epic superhero battles will take place in fully interactive and destructible 3D environments.

GS: Why Marvel versus EA?

DA: We wanted to create a new contemporary superhero family made expressly for games. Marvel has the most exciting and popular superheroes out there, and I couldn't be more excited about intermingling our new characters with the best from the Marvel universe.

GS: Where did you turn for inspiration?

DA: This team is full of comic nuts and fighting game experts. We looked at just about every fighting game you can imagine for inspiration. We were also heavily influenced by the films and the new generation of comics. These characters are coming into the 21st century, and we wanted to ensure that the game reflected this. From a gameplay standpoint, we were inspired by Power Stone, Super Smash Bros., and War of the Monsters, as they introduced more free-form fight mechanics. We really believe, though, that we have come up with something very unique and truly innovative that will get people very excited.

DA: One of the most exciting things about our partnership with Marvel is that we are not limited to any one family of characters, so, essentially, we can put all of the coolest characters into Marvel Nemesis. We have some of the best and most popular characters from the entire universe in the game. Stay tuned for more details on our character lineup!

GS: What can you tell us about the EA characters? Will they only be from the book, or will characters like the SSX skiers or a NFSU car be included as well?

DA: Heh! I always love that one. When we initially announced this project, we got a lot of heat from gamers about the EA characters. I am excited to watch the reaction to the new characters that EA has created, because some people out there will be surprised. We worked with one of Marvel's top talents (who I cannot reveal now) to help us with the backstories of the characters, and the result is truly amazing. For visuals, we turned to Paul Catling, who is a truly brilliant artist who has generated some spectacular work in movies like Spider-Man 2 and Harry Potter. I cannot tell you too much about the new characters right now, but the reactions we are getting to them are very positive, and I think people are going to just love these new heroes.

GS: What kind of fighting system will the game use?

DA: This game is all about innovation, and the fighting system is a great example of this. We have developed a fight system that will enable you to feel like a superhero almost immediately. The controls are very simple to pick up and learn, but the real beauty is that out of this simple control system comes a really deep and complex fight system that is also very intuitive.

GS: Was there any intimidation factor in working on the game, given how beloved Capcom's 2D Marvel gems are?

DA: I am a huge fan of the Capcom games, and we definitely played all of them as part of our research. The team used what it learned from these other games as a foundation that it evolved from. This is really the next generation of fighting games.

GS: What do you feel the game has to offer players in order to succeed in terms of control features, roster, and moves?

DA: As an avid fighting fan and a rabid comic book junkie, I've always wanted to see that game where the true powers and abilities of the characters really come to life. Working toward that goal, the team has created a truly authentic superhero fighting experience where players will actually feel like and fight like their superheroes. In addition to this, we have a roster that is not limited to any one family, as well as a revolutionary fighting system. Quite frankly, this is the game that comic and fighting fans have been waiting for.

GS: How much of a part will story play in the game?

DA: We have a very deep and intriguing story that we worked out with Marvel. Story has always been a weakness in fighting games due to their inherent nature. We wanted to create a story that actually supported the battles you participated in, and I think players will really get drawn in to it. I cannot go into too much detail about the story now, but everything is linked to it from the new characters in the plot.

GS: What kind of locales can we expect to fight in during the game? Will the areas be enclosed Tekken-style arenas, larger DOA-style arenas, or something else?

DA: To answer that question without giving too much away, I will tell you that the locales have been specifically designed to bring out the powers and abilities of the characters in the game. Depending on who your character is, you will have a different way of behaving in each environment.

GS: Will there be online play or downloadable content?

DA: We will indeed be supporting online play for this game. There will be some really great online play available for players. 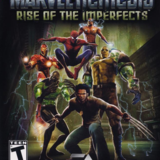