The Marvel open-world action RPG for mobile devices, Marvel Future Revolution, will launch on August 25 across iOS and Android, publisher Netmarble and Marvel have confirmed.

Pre-registration for the free-to-play game is available now on the App Store and Google Play, and everyone who does so gets a special costume box that comes with in-game cosmetics.

For those just catching up, Future Revolution's story takes place in a timeline where there are multiple Earths in the multiverse that come together to create what's known as a "Primary Earth." This place includes several zones to explore, including New Stark City, Hydra Empire, and Sakaar, among others. Players are enlisted into the Omega Flight team of superheroes and work alongside others to defeat supervillains and save Primary Earth.

Future Revolution has eight playable heroes--Black Widow, Captain America, Captain Marvel, Doctor Strange, Iron Man, Spider-Man, Star-Lord, and Storm. Customization is a big part of Future Revolution, and the developers say there are more than 400 million possible combinations for costumes for each hero.

In terms of the storyline, it is a "completely original" narrative, the developers said. Future Revolution is also the first Marvel open-world game for mobile.

Developer Netmarble Monster previously worked with Marvel on Marvel Future Fight, which reached more than 120 million downloads globally. For more on Future Revolution, check out GameSpot's video above featuring GameSpot's own Persia and Greg Miller of Kinda Funny talking to Danny Koo of Marvel Games and Joe Lee from Netmarble. The video was sponsored by Netmarble.

In other Marvel game news, Eidos Montreal is developing a Guardians of the Galaxy game for release this October. Additionally, Black Panther is coming to Marvel's Avengers in August, with Christopher Judge voicing the character. 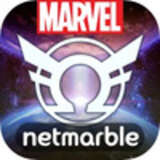