We grab a pocket-size racquet and get hands-on with Nintendo's upcoming tennis game for the Game Boy Advance.

Currently scheduled for release early next month, Mario Tennis: Power Tour for the Game Boy Advance is a somewhat unconventional tennis game in which you can pit characters from Nintendo's A-list against each other in both singles and doubles matches. In addition, you can name a more generic-looking character of your own for use in the game's world tour mode, which is a role-playing game of sorts with an emphasis on improving your tennis skills through training, practice sessions, and competitive play. We recently had an opportunity to spend some quality time with Mario Tennis: Power Tour, and we can report that we had a smashing (sorry) time with it.

On Mario Tennis: Power Tour's main menu screen you'll find options for the single-player power tour and exhibition match modes, multiplayer play for up to four players, minigames that you've unlocked on the power tour, player stats, gameplay options, and a handy-dandy glossary of tennis terms. The first option that you'll want to check out is the exhibition mode, which lets you take control of Mario, Peach, Luigi, Waluigi, Donkey Kong, Bowser, or a generic male or female character and play a quick match on either a hard, clay, grass, or composition court. Other prematch options will include making your chosen character left- or right-handed, and opting for a novice, intermediate, expert, or pro difficulty setting.

Given the GBA's small number of buttons, it'll come as no surprise to you that the control scheme in Mario Tennis: Power Tour is anything but complicated. The A button is used to hit shots with topspin; the B button is used to hit shots with slice spin; the right trigger is used to turn regular shots into "power shots"; and the left trigger is used for jump shots. Essentially, power shots are the thing that really sets Mario Tennis: Power Tour apart from other tennis games; once they're charged up, they let you play some incredibly powerful and outrageous shots. Mario's power shot, for example, lets you return the ball to your opponent using a bazooka instead of a racquet. Another interesting feature of the controls is that rather than holding down a button to charge up a shot, you'll tap it repeatedly.

One of the best ways to improve your game in Mario Tennis: Power Tour is through the power tour mode, in which you'll assume the role of a hopeful young tennis player in his or her first year at the Royal Tennis Academy. Your goal in the power tour mode, unsurprisingly, is to become the best tennis player you possibly can, which you'll achieve by moving up through the Academy's junior, senior, and varsity classes. In between ranking matches against other students, you'll have the opportunity to explore the sizeable campus, where you'll find a main building, a lodge (which is where your bedroom is located), a restaurant, a training center, a coaching area (where you can take lessons in serving, net play, and stroke play), and, of course, plenty of tennis courts. One of the most interesting areas to visit is undoubtedly the training center, because you can improve your character's skills simply by playing a number of different minigames there. To improve your character's speed, for example, you might choose to play a treadmill minigame that tasks you with mashing the B button to run and using the A button to jump over banana skins and barrels.

All of your skills in Mario Tennis: Power Tour fall into one of two categories: primary and secondary. Your primary skills are power, control, side spin, and speed. Secondary skills include your serve, stroke, volley, top spin, and slice. You'll earn points towards your next level every time you do something involving a racquet and a ball in Mario Tennis: Power Tour, and spending said points on your character (or on your doubles partner if you prefer) really couldn't be simpler. Improvements made to your character are quite noticeable the next time you play in a match, and things really heat up when you start learning different power-shot techniques.

Mario Tennis: Power Tour, then, is a game that has a whole lot going for it. We look forward to bringing you a full review closer to its release. 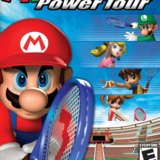