The brief video explains everything for when you take the Mushroom Kingdom pitch.

Nintendo has released a new overview trailer for Mario Strikers: Battle League, laying out the game's rules and giving players a few tips for how to play the Mushroom Kingdom's style of soccer.

The trailer shows the game's high-action take on soccer, including team tackles that let players push a teammate down the field, the Hyper Strike special shot that can score two goals at once, and the Strike Orb that activates the Hyper Strike.

The video also covers the game's multiplayer offerings, with both local and online multiplayer available at launch. Up to eight players can join a game locally, so long as each player has their own Joy-Con controller. Online matches include 1v1 and 2v2 options, with two local players able to jump online together. Finally, the Strikers Club online mode lets up to 20 players join a club together and rise through the ranks by playing online matches.

Mario Strikers: Battle League is the latest in the Mario soccer franchise, the most recent previous game being Mario Strikers: Charged for the Wii back in 2007. The game will launch June 10 on Nintendo Switch. 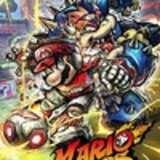