Mario + Rabbids: Sparks of Hope is the unlikely sequel to the unlikeliest of hits. The original Mario + Rabbids game, Kingdom Battle, was a wild collaboration between Nintendo's most iconic characters and Ubisoft's screaming, Minion-like goofballs, all mashed together with a healthy dose of XCOM. Most shocking of all was that it all worked together beautifully. For Sparks of Hope, Ubisoft is experimenting further with free movement more reminiscent of a traditional Mario game, new playable characters like Bowser, and an emphasis on flexibility with its new Sparks system.

"To me, it was a dream project and it was almost unbelievable to have the opportunity to start to work on a game with Mario and Rabbids," creative director Davide Soliani told GameSpot. "I always respected, as a player and as a developer, [Nintendo's] IP, but it was very tense for me to go in front of them and to pitch our idea. And since then, we kept collaborating together because we did Mario + Rabbids Kingdom Battle, but we also worked on [Donkey Kong Adventure]. Then we started with Sparks of Hope.

"I will say that we are now collaborating with Nintendo for eight years in a row. We never stopped collaborating with them, and this gave us confidence, strength, and knowledge of how to not just be respectful of their IP but also to know more about the Mario universe, going deeper and deeper. But we also strengthened our relationship in terms of exchanging ideas."

That bizarre mix of influences--a Mario game, but also a Rabbids game, but also a tactics game with adventure elements--meant Soliani and his team had to convince Ubisoft, then Nintendo, and finally, the players, of the game's merit. That made the team adopt a philosophy of constantly surprising players with humor and strategic depth. In Sparks of Hope, Soliani says he wants to surprise players with "this extra vibe of epicness." That extends to both the story, with a more expansive scope, and in terms of the combat systems.

"I believe that this was also true with the Kingdom Battle, but even more true in Sparks of Hope," he said. "There is such a depth in our combat system, which is one of the elements we are mostly proud of. There are others, but this is the core of our game, I believe."

Soliani says the combat system this time is heavy on synergy between heroes and skills, letting you customize the heroes to your liking with their skill points and giving you more flexibility and the ability to use combos. The demonstration we saw was a good example, showing a much greater range of ways that the heroes could interact with each other and the environment than in Kingdom Battle. While that game had a few combo moves, like spring-boarding off each other for extra reach, the short combat encounter we saw had a much greater range of synergies--from marking enemies for a combo attack to floating above for a gentle landing to using environmental hazards and enemies like Bob-ombs as weapons.

All of this is complemented by the new movement system, which is now free-roaming. Rather than selecting your position on a grid, Mario and his crew move the way you'd expect them to in any other Mario game, jogging around the battlefield, jumping over obstacles, and collecting coins. Combining that level of intuitive movement with more natural combat options, eschewing the last game's menu system, means this looks to imitate classic 3D Mario mechanics. It remains to be seen if Ubisoft nailed the feel of a Mario game, but it looks very naturalistic in gameplay demonstrations. Free movement is a core essence of Mario games.

"To me, [the new movement system] adds freedom," Soliani said. "That's the perception I wanted the player to have while playing the game. Nothing wrong with the grid system and the cursor; I love those kinds of games. I did Kingdom Battle because I love those kinds of games. But we didn't want to do just a pure sequel. We wanted to rework the game from the ground up. We wanted to bring a new reason and a good reason to buy another game. So freedom is what I had in mind. The ability to just run inside the battlegrounds, to vault over the cover and jump on the other side, dashing [into] some others that could be flipped and then taken and then thrown out of boundaries, or maybe against other heroes. For example, you can flip and throw the bomb against another bunch of heroes, so yes, it's an enemy that can damage you, but you can turn the table at your own advantage and flipping this guy and using it as a weapon instead.

"And this is just within the movement phase. Then you have the attack phase, the techniques, and bags full of items that you will be able to buy along the course of your journey. So there are a lot of elements, but all those elements can be quickly--super quickly--assessed in the combat system, but not like we were doing in Kingdom Battle by browsing different slots. You can quickly assess everything and move your character with the simple press of a button. So the dynamics and the velocity that the players have now with the combat system, it's another level. It's unmatched. And to support that, we also created the various types of enemies. Before they were always moving, attacking, and using the techniques. Now we have different kinds of enemies. So I believe that we have been better at proposing different kinds of interaction with the combat system and different ingredients to have fun with during the battles."

At the center of both the story and the gameplay are the Sparks--Super Mario Galaxy's Lumas crossed with Rabbids. The creatures are being kidnapped by the villain Cursa for unknown but certainly evil reasons, and as you rescue them you'll gain new suites of abilities and customization options. In the video we saw both a burst of electricity and a huge area-of-effect ice blast. But Soliani says they also augment the heroes, letting you enhance their existing strengths or make up for their deficits.

"First of all, the Sparks are creatures that you have to save from this malevolent entity that is, let's say, threatening the whole galaxy. But once saved, they can be used in combat, their power can be used in combat, in order to help you out. Those Sparks can also grow up along with you so you can make them stronger.

"And their ability and the fact that you can keep them as you want to any heroes, it's what makes the whole difference. You can take a new archetype and a specific Spark can either help what are already the good characteristics of a hero. For example, make it stronger with the Spark that is enhancing the damage output of any given hero. So if you take someone like Mario, that has already a quite good damage output, you can make it even stronger. But you can instead keep another kind of Spark, which is helping, maybe, the weaknesses of Mario. Mario is not as tough as Bowser. So all those combinations together is what is going to make the play style of each player shine. So the modularity of the Spark is what is going to make each hero even more interesting than before."

Mario + Rabbids: Kingdom Battle was a surprising addition to the Mario canon, not least of which because Nintendo is notoriously protective of its characters. Mario + Rabbids: Sparks of Hope appears primed to surprise players all over again, with a greater degree of flexibility and more Mario-like mechanics. The bizarre crossover experiment just keeps paying off in new ways. But this time, we aren't surprised at how fun and engaging the collaboration looks.

Mario + Rabbids: Sparks of Hope is coming to Nintendo Switch on October 20. 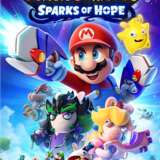