Nintendo titles like The Legend of Zelda: Breath of the Wild and Splatoon 2 still top the list.

It may have seemed like an unusual premise at first, but Mario + Rabbids: Kingdom Battle is proving to be a critical and commercial success. The Ubisoft game is now Nintendo Switch's top-selling non-Nintendo title, according to sales numbers from the NPD Group and Chart-Track GFK and reported by Eurogamer.

While Nintendo titles like The Legend of Zelda: Breath of the Wild and Splatoon 2 have continued to dominate the sales charts, other third-party games like Super Bomberman R have sold well. Still, Mario + Rabbids has already topped the list since its release at the end of August. Eurogamer also reports Nintendo has picked up the game for publishing in Japan and South Korea.

Mario + Rabbids: Kingdom Battle is a strategy game with its roots in XCOM-style, turn-based combat. You pick a squad of characters (including Super Mario staples and Mario-ified versions of Ubisoft's Rabbids) and face off against a bunch of enemy Rabbids. It also has a local co-op mode, where you team up with a friend and each control a squad of two.

The game has been a favorite among critics. In his Mario + Rabbids review, GameSpot's Edmond Tran said it "triumphs in creating a magical game world that is undeniably delightful." For anyone just picking up the game, check out our feature on the 13 things we wish we knew before starting Mario + Rabbids: Kingdom Battle.

At E3 2021, a sequel to the game was finally confirmed. Mario + Rabbids: Sparks Of Hope is coming in 2022 with characters like Mario, Luigi, Princess Peach, Rabbid Peach, Rabbid Luigi, and more. 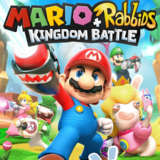