Nintendo's foray into mobile games is paying off.

Mario Kart Tour, the first game in the wildly popular Nintendo franchise to be released on mobile, has just hit a milestone of $200 million lifetime revenue. The racing game is Nintendo's second most successful game in terms of revenue, and the fourth highest-earning mobile racing game over the last year, SensorTower reports.

The racing game had a big launch back in September 2019, reaching 100 million downloads and $17.8 million revenue in its first 11 days on the store. It reached $100 million revenue in less than six months, with monetization in the free-to-start game led by the Gold Pass subscription which costs $4.99 per month.

Since its successful launch, both downloads and revenue have slowed down, but SensorTower's data shows its still been earning steadily through 2020 and 2021. Mario Kart Tour has now settled into a fairly consistent pattern earning $7.7 million per month on average.

When charting a year of revenue from April 1, 2020 to March 31, 2021, Mario Kart Tour sits in second place among Nintendo's small suite of mobile games, a little ahead of Animal Crossing: Pocket Camp, and quite far behind Fire Emblem Heroes, the game that accounts for 60% of Nintendo's mobile revenue. Among other racing titles on mobile, Mario Kart Tour sits in fourth place, with KartRider Rush+ the clear winner in that space.

While Nintendo's mobile games have proven to be steady earners, they reportedly have not shown the level of success the company expected from them. Reports released last year suggested Nintendo would be winding down focus on mobile development, with the platform taking a much smaller role in Nintendo's future. 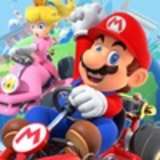