Thus far, Nintendo has been slow with bringing many of its heralded franchises to the 3DS, but that doesn't mean that they won't be coming by year's end. Earlier this month, Nintendo attached a June 19 release date to Legend of Zelda: Ocarina of Time 3D and said that Super Mario 3DS would touch down in 2011. Now, it appears as if the same can be said for Mario Kart 3DS.

French site Gamekyo reports that Nintendo design chief Shigeru Miyamoto attended a press event in Paris last week, at which the Mario creator purportedly stated that Mario Kart 3DS would arrive in 2011. The title was among the first shown by Nintendo for its glasses-free 3D handheld, which went on sale in the US last month.

Nintendo has thus far offered gamers little information on what they can expect from the most recent installment in the long-running kart racing franchise. At its 2010 Electronic Entertainment Expo unveil, the game was shown to feature Mario, Luigi, and Princess Peach racing outside the damsel-in-distress's castle. Miyamoto reportedly said to expect more information on the title at this year's E3 in June.

Beyond offering a broad window for Mario Kart 3DS, Miyamoto offered a few tantalizing details concerning the Wii 2, confirmed today as arriving in 2012. According to Gamekyo's report, the publisher has been toying with the idea of letting gamers use the 3DS as a controller for its next console, which is also rumored to have a tablet add-on.

Nintendo had not returned a request for comment as of press time. 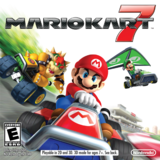