[UPDATE] We reached out to a Tampa Bay Lightning representative, who confirmed that the Mario Kart projection was a video created by part-time graphic artist Scott Sleder. The Lightning used it in Round 1 of the playoffs against the Detroit Red Wings, which explains the purple character--the Red Wings' mascot is a purple octopus.

"Actually, we had one with the Penguins mascot ready... but the outcome of the game was a downer going into the intermission having just given up a goal with 10 seconds left in the second period," VP of game presentation John Franzone told GameSpot.

This place is like a big Dave and Busters. They're playing Mario Kart on the ice: pic.twitter.com/G3Qbu8PzgS

"It was not 'played live' interactively… just 'played live' with the push of a button. The whimsy of it is just to get the fans swimming in some techno-nostalgia for a minute or two…albeit with a Lightning spin." The original story follows.

The worlds of sports and video games collided last night, as the Tampa Bay Lightning projected Mario Kart onto the ice during a Game 3 intermission in their series against the Pittsburgh Penguins. It doesn't look like any old version of the Nintendo racing game, however, as the one you see below features Lightning mascot ThunderBug and... some purple thing.

The video, shot by Seth Rorabaugh of the Pittsburgh Post-Gazette, shows what looks like a ROM hack of 1992's Super Mario Kart. It's not clear whether its live gameplay or just a pre-recorded video, but the two characters being controlled are ThunderBug and that purple thing. You can try to figure out what it is in the video--and if you do, let us know in the comments.

Other characters that can be seen include Bowser, Toad, and Mario. You can follow who's in the lead by looking at center ice or checking out the jumbotron above it.

This seems like it was an entertaining way to pass 15 minutes between periods, though the hockey game itself probably wasn't as fun for the hometown fans. The Lightning lost to the Penguins, 4-2. 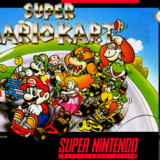