We had the chance to sit down--or stand up, rather--with Mario Baseball, the inaugural entry in what Nintendo probably hopes will be a new franchise featuring the familiar cast of the Mario games. We're pleased to say that Mario Baseball seems like it's going to be a fun game, although based on our brief playing experience, it should wind up being a bit tougher than previous Mario licenses, such as Mario Kart.

Before you begin a game, you'll be asked to select a character to captain your team from the menu screen. All the classic choices are available here, such as Mario, Bowser, Koopa, and Goomba. Each character is ranked in fielding, pitching, batting, and baserunning, with some characters tilted toward one extreme. Wario, for instance, is all about the big bat, while others are more balanced, such as Mario, who has no particular weaknesses. The character you choose is always your pitcher, so far as we can tell, while you'll have to rotate through multiple characters when you're batting. As a result, it seems like the game might favor picking a hot pitcher over the more balanced or offensively minded characters.

The game has a visual style that's very, very similar to Mario Kart: Double Dash. In fact, the style is so similar, we suspect Mario Baseball might even use the same engine. You know the thing: big, bright colors, well-animated characters, flashy effects when pitching and swinging, and more. We went through a couple of innings with Mario's team taking on one headed up by Koopa. Unfortunately, we got our butts soundly kicked, we're not too proud to say.

Single-player games will usually see you pitching first, so you won't be able to immediately jump into hitting if you just want to hit some homers. Pitching is a fairly simple affair, with an A press affecting the pitching motion. You can apparently use the analog stick to supercharge your pitch if you time the up and down motion, like the charge off the line in Mario Kart, but we weren't able to pull this off with any consistency. Apparently, these special abilities are only available to your team captain, so you'll want to check around and find someone who has something that you like.

As in the real game of baseball, actually getting the timing down for swinging at pitches is fairly difficult, at least when we first picked the game up. The ball doesn't move extremely quickly, but timing your swing so that you actually connect can be difficult, especially when you consider that you have to position your batter's stance before or during the ball's flight through the air. Furthermore, some hitters, like Koopa and Ghost, actually float above the ground while hitting, thus making the whole procedure even more difficult.

From our first look, it appears Mario Baseball should be another worthy entry in the Mario franchise. Stay tuned to GameSpot for more info on Mario Baseball as it becomes available. 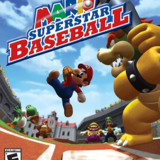