Korean supergroup BTS have been busy in the world of videogames this year, and that's not looking to change any time soon. This time, the pop group is teaming up with MapleStory, an ongoing Korean MMORPG that many of BTS's members have a personal history with.

Few details have been released about the collaboration, so it's as yet unknown what BTS will bring to the game world of MapleStory. While the free-to-play game often runs crossover events with popular anime and other games, this is their first time collaborating with a music group like BTS--though few other bands have the same superstar power as the biggest boy band in the world.

The teaser video shows BTS getting excited about the upcoming collaboration, with three future videos to be released that will focus on BTS members sharing their favorite memories of growing up with MapleStory. Further details about the collaboration will be released on MapleStory's website.

BTS have released two videogames of their own, BTS World in 2019 and BTS Universe Story in 2020. They've also been seen promoting Xbox Game Pass via Samsung's Galaxy Note 20 phone, and playing Fall Guys on their web series Run BTS. To cap it all off, in September this year BTS premiered the choreography music video for their song Dynamite through Fortnite's Party Royale platform for virtual events. 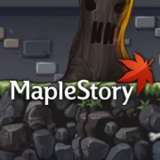