Q&A: Marketing director and executive producer behind Capcom's World Gone Sour weigh in on why the candy cried out for a game adaptation and the need to give Method Man creative freedom on a theme song.

Last week, Capcom announced World Gone Sour, a downloadable action adventure game based on the Sour Patch Kids candy brand with a theme song penned and performed by Method Man. The announcement immediately prompted a number of questions, including, "Why?", "What?", "Why?", "How?", and most importantly, "Why?" GameSpot posed slightly wordier versions of these questions and others to Sour Patch Kids marketing director Sebastian Genesio and Beefy Media executive producer Tim Lewinson.

GameSpot: How did this come about? Were the Sour Patch people looking for someone to make a game? Did Capcom identify the audience of people who wanted a Sour Patch Kids game as being unjustifiably underserved?

Sebastian Genesio: We wanted to create a way for our consumers to engage with the brand beyond the traditional means of marketing. Our consumers, with a focus on teens and young adults, are looking for authentic and meaningful content. Gaming, music, and social are the right platforms for us to connect with these consumers, and we're finding our work in these areas to be increasingly successful.

GS: How did Method Man get involved with the project?

SG: We approached Method Man to help us tell the story of World Gone Sour. As a self-professed fan of the brand and with creative freedom, he was on board from the start. He's also much like our "sour then sweet" kids, in that he's been known to be a bit of a rebel, but there's a sweet side inside his tough exterior.

GS: Method Man's lyrics could get this game a T-rating even in their censored form. Was there much concern about whether or not penis pump references fit with the Sour Patch Kids brand identity?

SG: Our biggest concern was creating content that was authentic, and that's why we gave Method Man complete freedom to create a track that told the story of the lost Sour Patch Kids through his eyes. Consumers are saturated with content each day, and we wanted something that would break through the clutter and become a shareable success. The music video has been a great success with more than 1 million total views, and we can only hope that we'll see this same excitement around the launch of the game.

GS: Is the game targeting a specific rating?

GS: What characteristics of a good license did you see in a brand of movie theater candy?

TL: With a wildly popular brand (that has close to 2.5 million Facebook fans) and a character that resonates with our core target of teens and young adults, we were inspired to create a fun game that combines Sour Patch Kids with memorable gameplay. Throw Method Man and Creed Bratton into the mix, and it's a no-brainer.

GS: Can you point to other licensed games as a successful blueprint of what you want to do with World Gone Sour?

SG: World Gone Sour had to stand on its own in terms of quality. There was no suggestion of letting the brand carry the title at the expense of gameplay. This game offers meaningful, relevant content for gamers featuring a rich storyline of what happens when Sour Patch Kids become lost.

GS: It's not terribly common for downloadable games to be announced with a price tag already on them. How important was it for people to know that this game would sell for $5? Would people simply not consider a candy-based game at a $10 price point?

TL: We really want to get World Gone Sour into the hands of as many gamers as possible, and with the PC release due this December, letting people know ahead of time that the cost is minimal while the game experience is maxed was essential. Five dollars is a great price point that lowers the barrier to entry so everybody has a chance to play a great platforming game at an accessible cost.

GS: So when does the Big League Chew game come out?

TL: At the moment, we're a little too busy eradicating the world of insane candy and deranged humans that are trying to stop the Sour Patch Kids from fulfilling their destiny of being eaten. 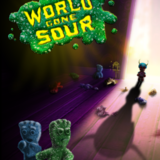