Majesco gears up for portable fighting

Fans of hair metal and fighting games who would like to not only combine their interests but do so in a form they can bring with them can mark their calendars: Majesco Entertainment has confirmed that its Guilty Gear series is going to arrive on the Nintendo DS and PSP this spring. The DS will get Guilty Gear Dust Strikers, complete with four-player fighting like that found in the PlayStation 2 game Guilty Gear Isuka, and a smattering of minigames that make use of the system's touch screen. On the PSP, Guilty Gear Judgment contains the new side-scrolling take on the series (after which the game gets its title) and a port of a more traditional installment in the series, Guilty Gear X2 #Reload. Guilty Gear Dust Strikers will retail for $29.99, while Guilty Gear Judgment will fetch $39.99. 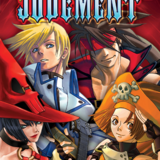