Mainstream media gets its act together

The latest example of tabloid sensationalism only underscores the progress made in the way games are portrayed in the media.

Earlier today, a well-known UK tabloid ran an article about terrorists using games like Call of Duty to plan attacks. The article doesn't merit a link or specific mention here, because it's a familiar brand of tripe produced by and for people who treat fear like an aphrodisiac. Sifting through phrases like "deadly plans," "growing threat," "deadly discussions," and "a terrifying reality," it boils down to an article that acknowledges games have private chat features, which means people could use them to communicate with each other about crimes they want to commit. Be sure to check back next week for a hard-hitting expose on the terrorist-friendly tactical tool that might already be in your pants. (To be absolutely clear, I'm talking about your phone.) 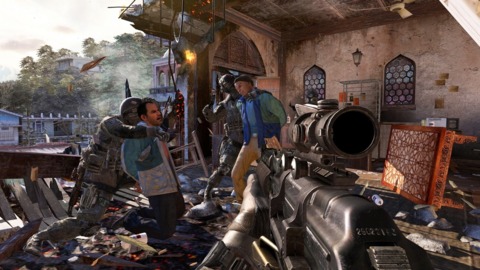 Is Call of Duty teaching your children to slow time while breaching doors in a hostage situation? Film at 11!

Doubtless, many gamers saw that piece and simply rolled their eyes at yet another example of the mainstream media getting it all wrong. And it is that. But it's also a bit of an aberration these days. After years of soft focus features about senior center Wii Sports bowling leagues, feel-good stories like the Child's Play charity, and the ever-growing chunk of the population who have played games (even if it's Angry Birds or FarmVille), there's a better understanding in our culture about what games actually are.

And as that first-hand experience grows, the fear of games--born largely of ignorance--settles into the background. You can see the change taking place in any number of ways. When was the last time you heard Jack Thompson credited as a gaming expert in the papers or on TV? When you hear of shootings on the news, is your first reaction to consider the tragic loss of human life, or is it to cringe and wait for someone to blame violent games? Did you even hear anyone complain about activist judges legislating from the bench when the Supreme Court sided with the industry in Brown vs. EMA?

We've passed a threshold here. Stories that use ignorance to drum up public outcry about games are no longer the norm. And while mainstream media coverage of games is by no means perfect, it is most definitely getting better. Outlets like The New York Times, Forbes, Bloomberg, USA Today, and many more regularly churn out well-informed coverage of the gaming industry. I'd link something as evidence, but factually accurate and informed articles are so common in those places now there's no reason to single any of them out. Even Fox News--which was up in arms over sex scenes in the original Mass Effect and publicized the idea that violent games like Bulletstorm cause rape--has sat quietly on the sidelines while the menace that is Mass Effect 3 corrupts an entire generation with its mandatory hardcore gay sex at the title screen (and the ending that has caused its own outrage, presumably for its lack of gay sex).

"Stories that use ignorance to drum up public outcry about games are no longer the norm."

So things are getting better, and that's encouraging. But they'll never be great. The very nature of news, and of being a journalist, will ensure that mistakes are always made. Journalists--especially mainstream journalists--must become instant experts on everything they cover. For every story, they must know the topic at hand well enough to put it in understandable terms for their readership while retaining enough of the nuance to ensure accuracy. The more writers push beyond their core areas of expertise, the more honest mistakes are going to be made.

Having journalists tied to specific beats can help this problem, but there's no eliminating it entirely. Even at GameSpot, we have writers who are more acquainted with massively multiplayer online games than platformers, more familiar with fighters than real-time strategy. And even if the focus were to be narrowed down further, we would have staffers familiar with 2D fighters but not 3D, or Battle Fantasia but not BlazBlue. There is no end to the number of subjects a journalist will have to cover, and the broader an outlet's audience is, the more diverse the array of topics becomes.

So while I can't promise the local news will never again proclaim the 3DS a hotbed of hook-ups for child molesters, I can at least point out that things have improved. And just as the mainstream media has recognized that games have progressed to a cultural staple, so too should gamers recognize mainstream media has been making progress of its own.