The popular collectible card game gets a tactical twist in this upcoming tactics game for the PC and PlayStation 3.

During our visit to Sony Online Entertainment's booth at E3 2010, we had a chance to see a bit of the upcoming Magic: The Gathering tactical game in action. If you know Magic, this game may surprise you. This isn't a card battling game, but rather a turn-based tactics game set in the Magic universe, using spells and creatures familiar to fans of the CCG.

Who's Making It: Sony Online Entertainment is behind Magic: The Gathering - Tactics. These are the experienced minds behind such online games as EverQuest, Planetside, and the like.

What It Looks Like: The games makes a positive visual impression. This is a tactics game, so you shouldn't expect it to push the limits of your PC or PlayStation 3 (the game will be released on both systems). What it does feature is a dark color palette and extremely detailed artwork that brings the cards Magic players know to life. Expect to see authentic animated versions of creatures like Serra Angel and Reya Dawnbringer, and dramatic environments that set the stage for epic clashes.

What You Do: Instead of creating decks, you construct spellbooks. At level 1, you start with 10 slots--five for spells and five for creatures--and you can have up to five copies of each card. Players will level up by playing the campaign and taking on other players online, which will allow them to expand their spellbooks.

How It Plays: Moment-to-moment gameplay works as you would find in a typical turn-based tactics game. Players take turns making moves and casting spells on the playing field. The smart interface makes it easy to see the entire turn order and prepare accordingly. While we didn't get our hands on the game, the demo we saw made it look fun and colorful. We saw fireballs light up the screen and oakenform cast, and the camera did a good job of highlighting the best moments. However, players will also be able to maneuver the camera as they need in order to get a good look at the battlefield.

Stats are characterized by much higher numbers than you would see in the standard card game. The reason is simple: higher numbers mean more epic matches. According to SOE, Magic: The Gathering - Tactics will include a number of different modes, and the campaigns will feature missions that require you to mix up your tactics.

What They Say: Magic: The Gathering - Tactics is all about taking the rules of the popular collectible card game and applying them to a tactical environment.

What We Say: The game client will be free to download, but booster packs will sell for a yet-to-be-announced retail price. If what we saw is any indication, Magic players will enjoy seeing their favorite franchise come to life on the game's richly drawn battlefields. Provided SOE plays its cards right, Magic: The Gathering will be available in fall 2010. 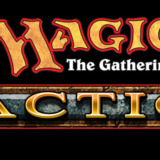