The action role-playing formula is one that's heavily influenced by Blizzard's classic Diablo, and it's one that remains highly popular to this day. After all, being able to run around a fantasy world as you slay hundreds of monsters and amass pile after pile of treasures can make for a pretty addictive experience. Mage Knight Apocalypse is the upcoming hack-and-slash action role-playing game from Namco Bandai Games America and developer Interserv, and it's set in the colorful world of the Mage Knight collectible miniatures game produced by WizKids Games. With the game due out later this month, we got our hands on the latest preview version to see how the hacking and slashing are turning out.

Since the game is set in the Mage Knight universe, it's closely tied with the existing storyline, though you won't need to have played Mage Knight to understand what's going on. In the wake of the dwarven Black Power Rebellion, sinister plots are unleashed throughout the world, and your character is drawn into the struggle. One attraction that we weren't quite prepared for was just how story driven the game is. You can play as one of five characters, and these aren't blank character classes that serve as avatars in the game. Instead, each character has a rich story and a different reason why they've taken up arms in the world. The game will start out differently depending on which character you play as, and the characters that you don't choose will eventually join your party as non-player characters that help you along the way.

Each character lends itself to a particular play style thanks to the skill trees associated to that character. For instance, the vampire skill trees are necromancy, assassin, and vampiric, so the vampire can summon zombies, stalk opponents, charm enemies, and more. The dragonmage can cast earth, fire, and storm magic, making him a potent magical damage dealer. The paladin is a good frontline holy warrior who can heal and resurrect allies or call lightning from the sky. The Amazon huntress can draw upon the bear's, jaguar's, and eagle's spirit for special powers. And the dwarves can use explosives and firearms.

Mage Knight's character creation seems somewhat limited for a role-playing game, but you might expect that due to the game's story-driven nature. Though you can't adjust the name or gender of each character, you can tinker with their appearance a bit, adjusting facial and hair features. Further customization can be done through the various items, weapons, and armor. After that, you're dropped into the world, and the hacking and slashing can begin.

We battled through the game's opening levels, encountering dozens of orcs, mechanical golems, and even stranger fantasy creatures, such as humanoid boars. Combat is as simple as repeatedly clicking on a target to strike. You can map both mouse buttons to different types of attacks, so the left one might be a melee attack, while the right one is a magical attack or a special ability. For instance, playing as the vampire, we used the left mouse button to attack with her sword and the right mouse button to use her blood-drain abilities, which sap the life out of an opponent and restore some of the vampire's health bar.

One of the interesting aspects of Apocalypse is that there are no traditional experience levels in the game. In other words, every time you kill an opponent, you don't get experience points that go toward raising your character level. Instead, skills and abilities are improved through use, similar to the Dungeon Siege games. The more you swing your sword, the stronger your character will get; or, the more you use a special ability, the higher in level it becomes.

Still, there appears to be plenty that you can do throughout the game to keep you busy. As you'd expect, there's an incredible amount of loot that you can collect, so you'll always be looking out for a better piece of armor or a stronger magical ring. Armor and weapons have sockets, which let you customize them with different powers. There's a crafting element, as well, as you can collect ingredients to create different types of potions.

The version that we played still had some quirks, mainly dealing with the interface. For instance, manipulating your inventory can require you to open up your backpack and your character screen, which is a cumbersome process. Or, seeing your character's stats requires you to slide open a tab on the character screen. Considering that you'll probably want to access all these screens quite a bit, this should be an easier process. Hopefully, this is one of the last things to get tweaked before the game ships.

We were surprised by the amount of humor in the game, as we encountered numerous guffaw moments, particularly during the many cutscenes in the game. There's a considerable amount of voice-over work to give life to the characters, and the dialogue and delivery at times feels like you're watching a cartoon rather than playing a game. Indeed, the game's colorful art style lends itself a bit toward that of a cartoon, and it seems to be in theme with the rest of the Mage Knight universe. Namco Bandai Games and Interserv should be putting the final touches on Apocalypse now, and the game should ship later this month. 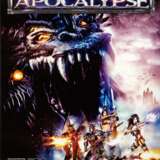