As more and more live sports broadcasts are being made available in 3D, it only makes sense that publishers, such as EA, would bring their big athletic franchises to the burgeoning world of 3D gaming. Case in point: Madden NFL Football on the Nintendo 3DS. Here at Nintendo’s New York media event, we just had the chance to play through what’s described by EA as a more simplified, inviting version of the console Madden experience designed for specifically for Nintendo’s shiny new hardware.

Who's Making It: While EA Tiburon is the team behind the console Madden games and, thus, the lead developers behind the franchise, Madden 3DS is being developed by a smaller studio a couple states away in EA North Carolina.

How It Uses 3D: There’s not really any one element of the screen that jumps out at you when you take a look at Madden 3DS for the first time. But after playing for a little while, you’ll start to pick up on different areas where the developers really wanted to highlight the 3D visuals. In particular, there are these occasional events called spotlight moments where a critical play is about to occur and the game quickly switches to a slow-motion, close-up view of the players involved. It’s almost a sort of Madden bullet-time effect, and the way that the camera gets right up in the action really helps the players jump out in 3D. But overall, Madden seems to be keeping it subtle with the 3D effects--which is probably a wise decision, considering all the movement and chaos that happens on the gridiron and the stomach-upsetting potential stuff like that has when viewed in 3D.

What You Do: Madden 3DS is a lighter package than what you’ll find on consoles when you look at features. It’s got standard 11-on-11 games, a faster-paced and high-scoring five-on-five mode, as well as a practice mode and a full season mode. Unfortunately, there’s no multiplayer modes or any sort of feature that shares data with other 3DS owners using the fancy street pass system that Nintendo has developed in an effort to make this new handheld more social than the old DS.

How It Plays: As we mentioned, Madden for the 3DS is relatively simplified installment in the long-running football franchise designed for 3DS owners who might not be familiar with all the ins and outs of the console versions. By default, the game uses the gameflow feature that automatically chooses your next player based on an AI system, similar to the “Ask Madden” option in previous games. Only here, you don’t have to ask for help--it just chooses your next play as soon as the last one is over to keep the flow of the game going. But, you can always choose your own play from a full playbook by simply hitting a button after the ball is down. Another feature for those who’d prefer to get more nitty-gritty with their coaching is the touch screen hot route controls. Before a play starts, you can see the passing play routes on the bottom of the screen to let you know which receivers are running where once you hike the ball. If you don’t like what you see or spot some weakness in the defense, you can simply tap on a receiver and draw a new route for him to follow using the stylus and touch screen.

What We Say: It’s a little disappointing that EA isn’t using some of the cooler features on the 3DS, such as street pass and wireless multiplayer, which strikes us as an all-too-common route to take on the first version of a game on new hardware. But with that gripe aside, this is a nice-looking version of Madden that seems to be taking the smart approach of simplifying things for a portable system. It’s not trying to be the Madden that you can play on your Xbox 360 or PlayStation 3--this is definitely something more appropriate for gaming on the go. You can expect to see it released on March 27 when the 3DS hardware hits stores. 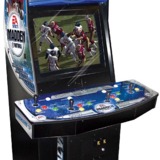