Electronic Arts kicked off revealing the Madden 20 player ratings when it announced all the highest-rated rookies. Now, the company has named Madden 20's four 99-rated players--the very best in the game, and that's before factoring in the new X-Factor super-abilities they come equipped with. [Update: EA Sports has now gone much further, revealing the entire Madden 20 roster's set of ratings. That includes the best and worst players at each position--along with the many individuals that fall in between those extremes--as well as the best and worst teams.]

The four 99-rated players in Madden 20 (at launch) include Houston Texans WR DeAndre Hopkins, Los Angeles Rams DT Aaron Donald, Seattle Seahawks ILB Bobby Wagner, and Chicago Bears OLB Khalil Mack. These ratings, and those of everyone else in the game, can and most likely will change over the course of the real NFL season. Roster updates are released routinely by EA Sports based on how players are performing on the field in the real world.

Madden 20's new X-Factor system grants highly rated players super-abilities that can be used at key moments, and these 99-rated players all have them. As Pasta Padre reports, "Hopkins wins aggressive catches against single coverage. Donald can place pressure on the QB even while still engaged in a block. Wagner gets tighter coverage and a higher chance of picking off a pass on contested catches. Mack’s pass rush leads to quicker block shedding."

The rest of Madden 20's ratings will be revealed throughout July leading up to the game's release. Keep check in back with GameSpot for more.

Madden 20 launches on August 2 for PlayStation 4, Xbox One, and PC. EA Access members will get a limited amount of time to play the game early, as per usual. 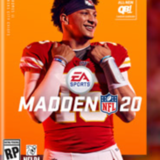