Madden 23 is out now for EA Play subscribers, Xbox Game Pass Ultimate subscribers, and anyone who pre-ordered the All-Madden Edition. If you're among those heading to the virtual gridiron early, you ought not to miss the limited-time Madden Ultimate Team (MUT) challenges. They'll disappear when the game officially launches on August 19, so prioritize these first. If you're on the fence about preordering the game--or if you're just waiting to get home and load up the EA Play trial--here's what you need to know about the Madden 23 early access MUT challenges.

The 10-hour EA Play trial is out a day earlier than advertised, meaning anyone who subscribes to EA Play or Xbox Game Pass Ultimate can play the game for up to 10 hours between now and when the game launches on August 19. Those who purchased the All-Madden Edition aren't limited by time, but if you're in any of the three groups, you can take on 10 exclusive challenges that no one else will have access to.

The challenges are pretty simple and serve mostly to give you a boost when starting another year of MUT play. If you're an annual MUT player, these challenges will seem pretty familiar, but if you're new to Madden--or just new to playing it early--here's what to expect across 10 in-game challenges.

Each challenge has a maximum of 400 coins you can earn depending on how many stars you earn. You can choose one of two difficulties for one or two stars upon beating the challenge, and chase another pair of optional challenges to max-out your stars earned.

Gain 23 yards on the drive. Bonus objectives include doing it in no more than five plays and rushing for at least 10 yards.

Score a touchdown. Bonus objectives include making it a passing touchdown and getting 5+ rushing yards.

Don't allow a passing touchdown. Bonus objectives include not allowing any touchdown at all and not allowing more than 23 rushing yards.

Gain 23+ passing yards in six plays or fewer. Bonus objectives include gaining the required yards in four plays or fewer and completing a pass in two different plays.

Score 3+ points on the drive. Bonus objectives include passing for 23+ yards and rushing for 10+ yards.

Get a first down and score a touchdown on the same drive. Bonus objectives include gaining 5+ yards on your first play and rushing for 5+ yards total.

Score a rushing touchdown. Bonus objectives include rushing for 23+ yards in six plays or fewer and getting two or more first downs.

Don't allow a touchdown. Bonus objectives include not allowing more than 23 yards and not allowing any passing yards on the first play.

23 Years In The Making

Score a touchdown. Bonus objectives include passing for 60+ yards total and passing for 20+ yards in three plays

Win the game. Bonus objectives include scoring 7+ points and not allowing the opponent to score a touchdown

Once you've completed all of these challenges, you'll have earned as many as 23,000 coins--which isn't a heck of a lot in your season-long quest to compete in MUT, but it'll at least help you quickly replace one of the sorry receivers the game starts you with. For more Madden guides, check out the best teams, the X-Factors list, and all 32 rosters. 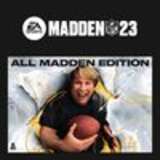