Electronic Arts’ football success continued today with an announcement that Madden NFL 2005 sold more than 1.35 million copies at retail stores in its first week, breaking its franchise record. NCAA Football 2005 was already one of July’s top games, and Madden looks like a sure shot to claim that title in August.

EA vice president of marketing Todd Sirlin was clearly pumped up about the huge release. “Once again, EA Sports has delivered the best football experiences in the market,” he said. EA gave several reasons for the increased demand for the game, such as the all-new user-created leagues (due later this year), the free EA Sports Premium Pass, and the game’s newfound compatibility with Xbox Live. EA also estimated that Madden and NCAA were responsible for 315,000 new online user accounts for both the Xbox and PlayStation 2. The game was also released for the GameCube and Game Boy Advance, with a PC and original PlayStation version due in September.

So successful was the launch of Madden NFL 2005 that online retails are already taking preorders for Madden NFL 2006. Even though it hasn’t officially been announced yet, players can already reserve copies of the game on EB Games and GameStop for various platforms. 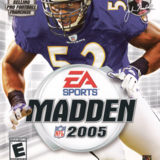