Canadian game company Digital Leisure has announced the release of its latest remastered arcade game, Mad Dog McCree. The game was first released in arcades by American Laser Games in the early 1990s. Players assume the role of a sheriff in the Old West, where they will have to battle a gang of bandits and outlaws and eventually meet Mad Dog in the final showdown.

The CD-ROM version of Mad Dog McCree will soon be available in stores for an approximate retail price of $19.99. A Sony PlayStation 2 version of the game will also soon be available for approximately $29.99. Digital Leisure also plans to release Who Shot Johnny Rock?, another game first released by American Laser Games, later this year. For more information, visit the official Digital Leisure Web site. 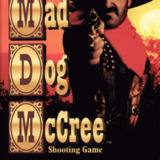