Konami shows off an updated version of its upcoming vampire-hunting sim. Undead creatures of the night beware.

You might think a game that somehow mixes vampires, old-school space shooting, action adventuring, a sunflower, and a cat might be completely insane. However, if you factor in a developer like Kojima Productions, all of the above actually works as a cohesive whole. Yeah, we were surprised too. But that's exactly what can be said of Lunar Knights, the upcoming DS game from Konami that lets you play as one of two futuristic vampire hunters out to thwart the undead. We were able to check out an updated version of the game at Konami's press event today.

The demo revealed the two types of gameplay in Lunar Knights, the action adventure aspects and the space shooting sequences. The action adventure sequence showed off the two hunters you'll control, the moody Lucien and the less emo Aaron. The demo highlighted the elemental buddies you'll be able to use in both types of gameplay and the benefits they provide. You'll be able to collect four elementals that are tied to the core elements. The demo showed off Ezra the ice elemental, and Alexander the wind elemental. When you've got one of the elementals equipped, you'll be able to perform a powerful special attack if a meter, dubbed TRC, is full. When you trigger the attack, you'll have to use your DS in a number of different ways. Alexander's attack requires you to draw tornadoes onscreen to take out enemies, while another attack requires you to blow into the DS microphone. This level of interaction continues during the shooting sequences when you'll have to use the stylus to take out enemy craft. Your elemental pals will affect your craft's firepower in different ways, which helps deal with the throngs of foes you'll face.

We were pleased for the most part by how the game handled. The action segments were nicely done and had a good feel to them. Enemy encounters, puzzles, and boss fights all worked pretty well. The second part of the boss fights, the space segments, seem like they'll take some getting used to. The mode's reliance on the stylus can be challenging.

The visuals in the game are detailed and have the look and charm of the Boktai games that preceded it. The sun and moon iconography owes a lot to the previous series but has its own stamp, which is nice. The assorted characters and critters in the game are nicely done and feature some nice animation touches, especially during their special attacks. The space shooting sequences offer a change of pace and look quite cool, especially when you're using one of your elemental pals to supplement your rocket's firepower. We're also fans of the sharp animated story sequences we saw that moved the story along.

The audio was hard to get a full grip on, but it sounds good so far. The music is distinctive, and the effects complement the action well. The TRC attacks are suitably over the top and work well with the visuals.

Based on what we played, Lunar Knights is poised to offer a funky experience on the DS. The adventuring seems solid and offers a good bit of depth, with the sun and moon mechanics, the elemental support, and the shooting segments. Aside from the sometimes-touchy shooting controls, Lunar Knights is doing a lot right. We're eager to spend more time with a proper build of the game to see if it comes together as well as it looks like it's going to. Lunar Knights is currently slated to ship later this year for the DS. Look for more on the game in the coming months. 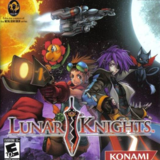