We get an exclusive look at the upcoming RPG for the DS.

The Lunar series holds a special place in the hearts of many a role-playing game fan. The franchise started in 1993 with Lunar: Silver Star for the Sega CD and has since spawned several sequels and remakes that have appeared on various consoles. The latest entry in the series, dubbed Lunar: Dragon Song, is an original game for Nintendo's DS that aims to blend a solid RPG experience with dual-screen support in one tight package. We had the chance to get an exclusive look at the game to see just how the DS's first proper RPG is turning out.

Lunar: Dragon Song's story features a cast of original characters, placed in the now well-established Lunar template that isn't too far off from the premise of just about any RPG. You'll be cast in the role of Jian Campbell, a 15-year-old boy who works as a courier in the harbor town of Searis. His companion and business partner is a 14-year-old girl named Lucia Collins. (We'll just gloss over the child labor issues, shall we?) The pair leads, by all accounts, a fairly low-key life that revolves around work. This all changes when a simple package-delivery job sends them on a continent-spanning adventure that will lead them to make new friends and save the world.

If you're a fan of the series, you may be bummed that the only similarities we've seen so far between Dragon Song and the previous Lunar games are the world and the mythos revolving around the goddess Althena. However, you'll still get to roll with beastmen and cast magic spells, so you'll definitely feel like you're on a Lunar adventure. From what we've seen of the dialogue so far, the game is attempting to hold on to one of the Lunar staples, humor, while telling its story.

The gameplay in Lunar: Dragon Song is a good mix of familiar and new elements; anyone familiar with the RPG genre, especially the Lunar games, should have no trouble diving right in. Your time in the game will be spent exploring, leveling up, and interacting with the game's eclectic cast of characters. Exploration happens in one of two ways. When you're in towns, you'll see specific spots that, if you stand on them, will let you access different areas in the town. When you're exploring on foot, you'll be able to examine objects and locations for hidden items. The only gripe we have about these sequences is that your party's health goes down if you run for prolonged periods. Although developer Japan Art Media has suggested that the minor health loss adds a touch of realism to the game, we have to say that we long for our good old-fashioned infinite fantasy running.

Leveling up your party is an interesting new feature in the game, which ties in to the battle system. The system breaks down into two mode types, virtue and combat, which you can manually select outside of combat. When battling in virtue mode, you'll earn experience that will let you level up your party. Virtue mode will also let you access hidden chests that can be opened only after you've defeated a certain number of enemies. While defeating the appropriate quota of enemies isn't much of a problem initially, you'll find this more challenging as you progress, due to a time limit. Basically, every time you defeat a foe, a box will be checked on the lower DS screen menu and a stopwatch will begin counting down. If it counts all the way down to zero, your foe will reappear; but if you manage to take out another enemy before it counts down, it will start counting down from scratch again to give you more time to hit your quota. Once that's out of the way, you'll get a percentage of your hit and magic points back. The biggest perk of fulfilling these conditions is the ability to open special chests that yield useful items.

When battling in combat mode you won't earn experience, but rather, items. The items you'll collect in the game also tie in to another new aspect of the game: collectible cards. Whereas the GBA Lunar had you collect cards that you could view in an art gallery, the cards in Lunar: Dragon Song are more useful. The cards you'll collect in battle mode will each have unique attributes, such as increasing your attacks or restoring mana, which you can use in and out of battle, depending on the card. In addition, when defeating foes you'll gain all manner of items that will come in handy later in the game. It appears that your main means of securing income will be to take on courier jobs, which typically pay good money. The catch is, you can only take one at a time, which gives these side quests a very deliberate pace.

As far as the touch screen goes, Lunar: Dragon Song takes a pretty low-key route toward exploiting the DS. The second screen on the system comes into play during conversations, often holding dialogue to keep the action on the main screen free of clutter, and it always holds icons that let you access submenus or switch between combat modes. During combat the screen just lets you make menu choices.

The visuals in the game are a smart collection of traditional 2D graphics along with some DS-enhanced graphical effects that give the game some punch. In the traditional third-person exploration sequences, you'll be treated to nicely done sprites that lean toward the nice end of the 2D rainbow. The characters are good-sized and they animate well. Detail on them is high, with little flourishes that are notable when they run, or during the victory sequences that follow a battle. During combat, the camera comes in close, and your field of view doubles to make use of both screens. The characters during these sequences are larger and a bit more pixilated, but they animate well. One of the nice touches we picked up on during battle is the ability to speed up the action by holding either of the DS's triggers. Finally, the story is helped along by static screens that showcase Toshiyuki Kubooka's character designs and artwork to good effect.

The audio in the game is a bit uneven for our tastes right now. On the one hand, the music in the game is fine, and actually plentiful; each area we've seen has a unique theme. The sound effects are also nicely done for the most part and help keep combat lively. The one spot we feel a bit shortchanged on right now is voice. Our expectations for the audio in the game were running pretty high in the wake of Lunar Legend for the Game Boy Advance, which featured a modest assortment of audio clips. We figured, if the GBA game could have clips, then the DS title should come packing cool audio business as well. Unfortunately, this isn't the case for the work-in-progress version of the game we're playing, so we're hopeful something gets added further into the story.

Based on what we've played, Lunar: Dragon Song has the potential to be an involving experience on the DS. The story is interesting, and the gameplay certainly offers some fresh twists on the expected RPG conventions. While we're not sold on all of them just yet, at the very least, the new features show that Game Jam is open to trying something new, which is always nice to see. Although the visuals are technically very nice, we do miss the old-school superdeformed look of the previous games. The game's use of the DS's dual screen and touch functionality isn't terribly extensive but works well without being obtrusive. All in all, Lunar: Dragon Song has all the elements you'd want out of an RPG. Although it could use a little tightening up, the game looks like it's going to offer a strong experience for DS owners looking for an RPG. Lunar: Dragon Song is slated to ship this September. 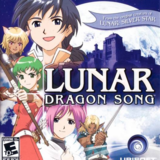