Lotus racing heads to the PlayStation 2 and PC.

Virgin Interactive and British automobile manufacturer Lotus have announced Lotus Challenge for the Sony PlayStation 2 and PC. Several of the current Lotus sports cars, including the Esprit and Elise, will be featured in the game.

The game will be based on the simulation aspects of racing, integrating realistic driving physics, car models, and environments. Lotus Challenge will be released in early 2001. 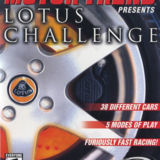