After an anemic past couple of weeks, Nintendo has returned in force with eight new additions to the Wii and DSi's respective online shops. On WiiWare, Frontier and Hudson have a new platformer and shooter on tap, while Tecmo's classic Rygar side-scroller hits the Virtual Console. Meanwhile, the DSi sees the addition of five new alternatives in its Domo line of portable games. 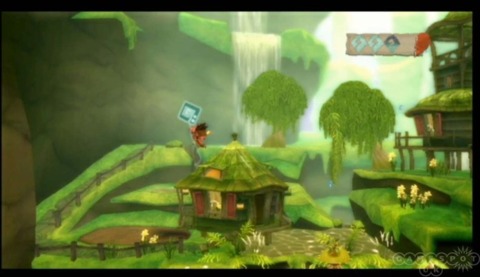 A sequel to one of the first WiiWare titles, LostWinds: Winter of the Melodias returns with new puzzle-platforming elements for 1,000 Wii points ($10). Winter of the Melodias heavily emphasizes motion-sensing controls, as players use the Wii Remote to guide the boyish protagonist Toku to explore and survive new vibrantly detailed environments.

As its name suggests, Shootanto: Evolutionary Mayhem sees players engage in a Darwinian quest for higher learning. The game begins with players assuming the role of oafish simians battling lizardmen, and subsequent levels see the character evolve into a caveman, a human knight, and a soldier. The 500 Wii points ($5) shooter supports play for up two. Tecmo's arcade action game Rygar, which debuted in 1986, rounds out the Wii Shop updates and is available through the Virtual Console for 600 Wii points ($6).

Nintendo pays homage to Japan's monstrous Domo cartoon character with a five-pack of downloadable titles for the DSi. In Hard-Hat, Domo speed-climbs buildings, and the remainder of the games see him racing bikes in Crash-Course, golfing in Pro-Putt, matching notes in Rock-n-Roll, and rafting in White-Water. Each game can be purchased individually for 200 DSi ($2) points.