Konami releases new information on its survival-themed role-playing game for the Nintendo DS.

Currently scheduled for release in September, Lost in Blue is a role-playing game that, according to Konami, will "take players on a journey of survival, adventure, and mystery." The stars of the game are two teenagers who find themselves stranded on a deserted island after a disaster at sea. While the pair plans their escape, you'll have to keep them alive by playing a series of survival-themed minigames, such as fishing, hunting, trapping, and cooking.

Lost in Blue will be played primarily using the DS's touch screen and will offer multiple endings according to the two characters' lifestyle, relationship, dialogue, and eventual means of escape. Replay value is obviously high on Konami's list of priorities for Lost in Blue, since in addition to the multiple endings you'll be able to have a very different experience playing as the game's heroine once you've beaten it as the hero.

We'll bring you more information on Lost in Blue as soon as it becomes available. 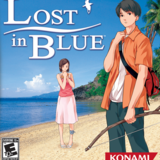