New quirky creature title--billed as an "interactive screensaver"--coming exclusively to the PlayStation Network.

The original LocoRoco game, created by Japanese game designer Tsutomu Kouno and producer Kazuhito Miyaki, was first released in Europe in June 2006 on the PlayStation Portable. The player moved the creatures called LocoRoco through the game using the L and R buttons to tilt the screen, joining them together and splitting them apart again to access different areas. A mobile version of the game has also been spotted in Japan. For more info on LocoRoco, check out GameSpot's previous coverage.

The game will cost £1.99 in the UK--international pricing has yet to be confirmed, but will likely be in the region of $4 for the US. 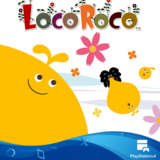