Dragon Age: Inquisition costume pack included with all Day 1 versions of the upcoming game; release date for PS3 and PS4 is November 18.

Sony also today announced the preorder bonuses for LittleBigPlanet 3. Preorder the game anywhere and you'll receive an adorable Sackboy plush toy. Meanwhile, Target shoppers will get the toy alongside a special hat (for the toy), which is exclusive to the retailer.

In addition, a special Dragon Age: Inquisition costume pack will be included with the Day 1 Edition of LittleBigPlanet 3, which anyone who preorders the game will be automatically upgraded to. This goes for preorders placed at physical retailers and online. On top of that, the LittleBigPlanet 3 Day 1 Edition also includes costumes for popular PlayStation characters like Nathan Drake (Uncharted), Ellie (The Last of Us), Delsin (Infamous: Second Son), and a Helghan soldier (Killzone).

The preorder bonuses mentioned in this post are for North America only. Sony will share details for European LittleBigPlanet fans in the time ahead.

LittleBigPlanet 3 is the first entry in the core series developed outside of franchise creator Media Molecule. Sumo Digital is developing the game, while Media Molecule is working on an unannounced PS4 game. 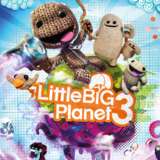