We got a fresh look at this cute Japanese role-playing game and discovered a range of quirky townsfolk, enemies, and quests to complete along the way.

The chaps from Rising Star Games paid us a visit recently and gave us a new look at the upcoming Wii role-playing game Little King's Story. As the name suggests, you'll assume the role of a child king in the game, with a modest kingdom at your command. As you meet your people, explore, and perform quests from them, you'll grow from strength to strength, along the way making a name for yourself in the history books.

One of the first, and possibly most important, structures you can build is a town square, for the price of 1,200,000 bol--the game's currency. Once it's built, a suggestion box allows citizens to give you new quests, such as tracking down and vanquishing a ghost cow that's causing havoc in the graveyard. You can build other structures, including guardhouses, to teach civilians to become soldiers, as well as train up other classes, including farmers and carpenters. Additionally, you can retrain any citizens if you find there are too many of one class--but at a cost of both money and time.

When you begin your epic quest, you'll have dominion over only five citizens at a time. As your empire grows and becomes more successful, you'll earn more renown, and your population will grow. Each new hut you build can accommodate two new citizens. As citizens' heath levels drop, their appearance will visibly change--their skin will age, their hair will whiten, and they'll be stripped of some armour. In addition to these visual clues, costumes will indicate what class your citizens are, which makes it easier to see at a glance what state they're in.

Little King has an uncluttered look, but there are still a few visual aids on hand. A minimap at the top of the screen shows a compass as well as resources, buildings, enemies, and other important items. Meanwhile, a separate window reveals an inventory and the status of your troops. A timer in the top left of the screen shows you what time of day it is, and unless you're on a current quest, your people will retreat to their homes at night. One cool addition is a live news ticker that gives you updates on your kingdom. Examples include "Got fungus," "Kate died," or even "Wow you must really hate your subjects" when giving them life-threatening tasks. If you have nearby citizens who are currently unassigned, they'll also tell you what they think of your leadership with approving or rude gestures.

The game has a cutesy, almost cel-shaded look, and it's hard not to draw comparisons (both in graphics and gameplay) to Animal Crossing's look and RPG elements and to Pikmin's real-time strategy gameplay. Combine that with a light, upbeat soundtrack from Kingdom Hearts composer Yoko Shimomura, and the result definitely feels suitably cute and cuddly. We spent more of our time in and around the village and heard a few festive songs composed mostly of tin-whistle and accordion melodies, but we'd expect things to get more dramatic as you head to the open road. We came across a number of enemies, including slugs and turnip monsters that disguise themselves and then attack your unsuspecting farmers. It's always wise to have a range of classes at any time so you can assign soldiers to attack, miners to dig for gold, or farmers to harvest crops.

There are seven nations that surround your kingdom, and eventually you'll need to take over those territories through armed conflict. Before you do that, however, you'll need to build bridges to allow your troops to access those lands, and we're told there will be certain criteria that you'll have to meet before unlocking the ability to defeat some leaders.

One of the boss battles we encountered was a huge frog. The noxious amphibian spewed poison, sapping the health of some of our troops, and it even gobbled some up whole. Once you defeat a boss you'll gain the territory that it inhabited, expanding your dominion. You'll also be able to earn money from prospecting for gold where you see cracks in the ground, or through digging up vegetables, cutting up woods, and more. When your battle-weary soldiers need a rest, the nearby Alpoko Springs cures bruises, sprains, poison, and "geriatrics" (the aged signs of weak health).

In our time with Little King we also encountered an amusing religious character called Kampbell, who is on a quest to build a Soup Church for the Sect of Soup. After an amusing little chat, he finished off a priestly blessing with a "ramen." Little King seems to have a good sense of humour, and with sprinklings like this we expect it will provide chuckles for all ages.

Little King's Story currently has a March release date in Europe, with releases in the US and Japan coming later in the year. It looks to be a fun addition to the Wii lineup for those who fancy making a name for themselves as a miniature monarch. 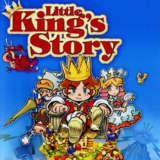