We got our touch on with the upcoming NGP title from UK-based Bigbig Studios.

Little Deviants was one of the games used to show off the touch functionality of Sony’s PlayStation Portable successor, dubbed the NGP at today’s PlayStation meeting in Japan. The whimsical title is being developed by UK-based Bigbig Studios, who recently worked on MotorStorm Arctic Edge for the original PSP, and lets you interact with mischievous critters by manipulating the world around them. We had the chance to try the demo shown on stage at Sony’s Japanese offices to see just how the touch functionality works on the upcoming system.

The demo we tried was basically a sandbox-style playground in which we knocked deviants around. The small area featured sections within it that had deviants, ramps, paths to shoot the deviants through, and stars to collect. The main control scheme for the demo was the NGP’s touch screen and pad, which let you adjust the camera, morph the world, and fling the deviants around.

Control in the demo broke down to morphing the world with the back touch pad, which let you raise the ground around and under the deviants to move them; moving the camera with the front touch pad; and flinging deviants by combining the front and back touch screen. Using the back screen lets you raise the ground under and around the deviants, which lets you roll them around in different directions. When the need to change the game’s view would come up, a sliding motion on the front-facing touch screen would shift the view with a swipe. The most interesting use of touch required use of both the front and back touch screens to “pinch” the deviants and pull back, stretching them like a rubber band and allowing you to shoot them in any direction as you released your virtual grip. The only odd thing we encountered was moving the camera, so getting used to it was a little tricky.

The visuals in Little Deviants had a cartoony look to them that wasn’t exactly pushing the limits of the hardware. The deviants were an oddball group of creatures that were cutesy in their own right. The environment was simple, as were the other characters peppered around the atmosphere. The interesting element to the graphics was the morphing of the environment. While it’s admittedly nothing we haven’t seen before, everything ran smoothly and popped with bright color.

The preview of Little Deviants worked well as a tech demo for how players will make use of the newly announced hardware’s touch functionality. The intuitive and responsive system for morphing the world and moving the deviants around is interesting and certainly shows the potential for what can be done on the NGP. We’ll be curious to see just what kind of game Little Deviants turns out to be, but it certainly makes for a neat tech demo. Look for more on the game in the months to come. 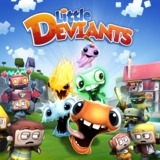