Zur's score is described by Ubisoft as "soaring and uplifting." The one track released so far, "The Wild Sky," features the voices of singers Aeralie Brighton and Mimi Page. Listen for yourself in the video below.

"Inon's immense creative energy is ever present in this score," Ubisoft music supervisor Benedicte Ouimet said in a statement. "He captures the thrill of flying and the awe of our poetic Paris with brio. Whether players soar or dive, chase or glide, Inon's music will carry players through this beautiful VR adventure."

The soundtrack will be available to buy when Eagle Flight launches this fall.

Eagle Flight was developed at FunHouse, which is a division of Ubisoft Montreal. As the name suggests, you become an eagle and soar over Paris. It has the city's iconic landmarks, such as the Eiffel Tower, but this isn't exactly Paris as you know it. Eagle Flight is set 50 years after humans have left, at a period when nature has taken back the city.

The game is coming to PlayStation 4's PlayStation VR, as well as Oculus Rift and HTC Vive on PC. What do you make of the title track? Let us know in the comments below. 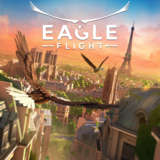