Source: Lionhead animation director Andrew Lindsay, as related by a Swansea Metropolitan University student's Twitter feed.What we heard: Last month, BBC radio and television personality Jonathan Ross claimed through his Twitter feed that he had been tapped to provide voice work on Lionhead's... 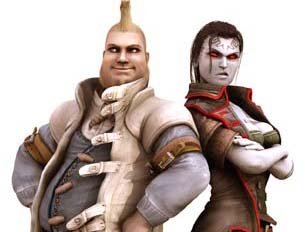 What we heard: Last month, BBC radio and television personality Jonathan Ross claimed through his Twitter feed that he had been tapped to provide voice work on Lionhead's as-yet-unannounced next project, Fable III. While it remains unclear whether Ross was referring to Fable III or simply to downloadable content for Fable II, Twitter has again stirred up the rumor mill regarding Lionhead's future endeavors.

According to the Twitter feed of Swansea Metropolitan University student, Lionhead animation director Andrew Lindsay confirmed that his studio was at work on an all-new intellectual property and that the first details on the project would arrive as part of this year's Electronic Entertainment Expo in June. Lindsay supposedly delivered the news as part of Swansea Metropolitan University's AmperSAND digital medium forum, where he had been scheduled to speak tonight.

When contacted by GameSpot, the student offered a few more details from Lindsay's presentation. "Every now and then industry heads visit our class," he said. "Not much was said really, just that an announcement for a new game of a new franchise will be revealed. He showed off some incredible facial animation and spoke about some skin textures (put skin up to a light and the red translucent glow)."

While not concrete, the information fits with recent statements made by Lionhead studio head Peter Molyneux. As part of his Game Developers Conference presentation, Molyneux himself nearly outed the title. In describing the cost structure of the Lionhead Experiments program, Molyneux noticeably checked himself, saying, "I almost said the project we were working on. That would have been disastrous!" Molyneux also noted during that presentation that Lionhead plans to incorporate a Portal-esque gameplay mechanic into one of its future titles.

As for the potential of an E3 reveal, Molyneux also said at GDC 2009 during an interview with GameSpot that Lionhead was getting close to showing off what it has been working on. "I feel more empowered to be able to do the most bizarre, most out-there ideas, and I think interestingly you're going to see the product of that come forward very soon," Molyneux said. "I think Lionhead's almost ready to start showing the world what happens when you feel safe about experimenting and inventing and prototyping, and that can lead to some pretty amazing things and we've got some amazing things in our pocket."

The official story: Unfortunately, neither Lionhead nor Microsoft had anything to say on Lindsay's apparent reveal. "We cannot comment on rumour and speculation," a Lionhead representative told GameSpot. [UPDATE] Late on Wednesday, Microsoft provided GameSpot with the following statement: "Lionhead is always exploring new game concepts and we are constantly exchanging ideas about new stories we can tell and experiences we can deliver to our customers through games. As soon as we have something to announce, we'll let you know."

Bogus or not bogus?: Very tentative not bogus. With Fable II wrapped, downloadable content isn't likely to occupy the entire studio's attention. Plus, Molyneux's statements lend a good deal of credence to the notion that something will bubble over soon.