As far as gameplay modes are concerned, each version of Soul Calibur II will feature arcade, versus, time attack, survival, team battle, and practice. In addition, the game will feature an entirely new mode called weapon master, in which players can collect more than 200 different weapons to equip their characters with.

Soul Calibur II is scheduled for release on March 27 in Japan. The North American versions are slated for an August 2003 release. 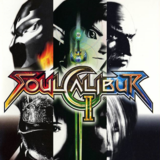