During Level-5's world press conference on October 15, president Akihiro Hino announced a plethora of new titles, ranging from sequels to the soccer title Inazuma 11 for the Wii and DS, as well as new franchises. One of the new titles is Yokai Watch, an upcoming "cross media" title similar to the company's Danball Senki and Inazuma 11 franchise.

Players control a kid who can see spirits and ghouls ("yokais" in Japanese) through his new watch. Accompanying him is a white ghost that acts as a guide. Players have to solve unusual problems caused by the invisible spirits by summoning other tamed yokai to fight them.

These ghosts include tiny ones with arms on their chins that can put thoughts into unwary victims and mid-sized mosquitoes wearing robes that can fly and inflict the feeling of depression and weariness onto others. While there was gameplay footage for the title on the show floor, Level-5 has yet to announce a platform and a release date.

Hino also announced the platforms and release year for adventure game Time Travelers. The title will be out on the 3DS, PSP, and PlayStation Vita, and it is slated for 2012.

The adventure game takes place in 2031, where Tokyo will experience a future disaster. Players will control five different characters whose stories tie in together, thanks to the schoolgirl Mikoto, who can somehow predict future events in the timeline. Director Jiro Ishii said that the game plays out like an interactive movie.

The president also announced a spin-off of the Professor Layton adventure game series: Layton Brothers Mystery Room for the iOS. The main character is Alfendy Layton, the son of Professor Layton, who owns his own detective agency. Gamers will root out suspects and find clues in a crime scene to solve different kinds of cases. The game will use the touch screen for navigation and puzzle-solving. Helping Alfendy is his assistant, Lucy Grey.

There is currently no release date announced for the title. Originally, the game was known by a different title, Mystery Room, and starred two detectives, Sly and Poccio, as they rifled through evidence and solved cases. The game was originally supposed to be on the DS.

Hino also revealed more details on the upcoming fantasy role-playing game simulation Fantasy Life. The game will feature over 20 different character classes, ranging from a fighter to a blacksmith. The soundtrack will be scored by Nobuo Uematsu, while the game's title artwork will be done by Yoshitaka Amano. The simulation is slated for a 2012 release. 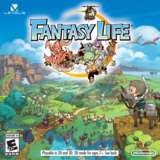