We go plunging to our collective doom to bring you our impressions of the new mobile version of Lemmings.

Fourteen years ago a small development studio in the east of Scotland had, let's face it, the unnerving idea of basing a 2D puzzle game around suicidal rodents. The aim of DMA Design's now-legendary Lemmings was to guide 100 of the cute, little critters through a series of hazard-filled screens. What gamers quickly grew to love was the emergent nature of the gameplay--you often genuinely believed that you had found a unique way of completing a level. Absolute design genius.

Lemmings was an enormous success on the Amiga home computer, inspiring a range of conversions and sequels on quite a breathtaking array of platforms. And now it's back, on the current retro-gaming technology of choice: your cell phone.

Announced back in August, the Java version of Lemmings is now in its final stages of development, and Manchester-based publisher iFone reckons it’s an extremely faithful adaptation, as it should be. The company’s CEO, Morgan O’Rahilly, previously worked on Lemmings Revolution with Psygnosis, and apparently many of those who were on the original design team have been involved throughout the conversion process.

The central concept of the game is to adapt a series of caverns and construction sites so that your lemmings can pass through unscathed. The mindless lemmings simply wander along the screen and if there’s nothing to stop them plunging to their deaths, then that’s exactly what they’ll do. You get eight skills, such as bridge-building, digging, and climbing, with which you create a safe route through the scenery. Simply click on the skill from the menu at the base of the screen, then click on the relevant lemming, and yoru order will be carried out. It’s all about quickly assessing the obstacles and by-passing them before the body count gets too high. It’s hectic, it’s demanding, and it’s open to a range of highly personal tactics so there are loads of ways to complete each screen.

The mobile version retains the intuitive point and click interface, although, according to Senior Producer, Phil Gaskell, this has been a challenge: “There has been lots of focus testing and prototyping! We tried several methods, but each had its drawbacks. We finally settled on a system we believe is true to the original mouse control, but with shortcut keys that affords players’ precise control over selection and quick access to the skills.”

So far, so familiar. But a number of tweaks have been necessary to ensure a successful conversion. The maximum number of Lemmings on screen has been reduced from 100 to 25, and some graphical alterations have been made to adapt the game for small cellphone displays. The lemmings themselves, however, have been increased in size and their animation reworked to add to the characterization. The team has also included most of the original sound effects and speech samples such as ‘Let’s Go!” and “Yippee!” and is adding new effects to accentuate the greater emphasis on character. “The Exploder animation in particular makes us laugh every time we see it!,” says Gaskell.

Finally, iFone has packed in 28 stages, split into three skill levels--fun, taxing, and mayhem--and they're not ruling out the possibility of providing further levels as download packs. This is just the beginning. As Gaskell explains, "We don't want to give too much away at this stage, but we are currently investigating connected gameplay, as we know Lemmings makes a great multiplayer experience. Plus there are other much-loved titles from the original Lemmings series in the pipeline." Yep, Amiga gaming fanatics are in for a nostalgic 2005… 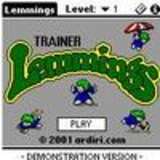