The latest adventure of the lovelorn Larry is now available on the go.

A classic point-and-click franchise's latest entry is now available on your mobile device, as Leisure Suit Larry: Wet Dreams Dry Twice has been added to both the iOS App Store and Google Play Store for $15.

Wet Dreams Dry Twice takes place immediately after the events of 2018's Wet Dreams Don't Dry, as Larry finds himself stranded on a deserted island, his "soulmate" Faith gone missing. Players will explore the island through classic point-and-click gameplay, solving puzzles in order to find out what happened to Faith.

Publisher Assemble Entertainment will also launch a "Save The World Edition" on Steam for $45 as part of a partnership between Assemble and the ShareTheMeal charity. Those who purchase this edition will receive the game's official soundtrack and digital artbook, "with every purchase guaranteeing two meals for hungry children around the world" according to the official release.

Leisure Suit Larry has featured in risque point-and-click adventures since 1987, when his first ever game--Leisure Suit Larry in the Land of the Lounge Lizards--released on MS-DOS and other PC formats. The original Larry game was then published by Sierra Entertainment, which is now part of Activision Blizzard. 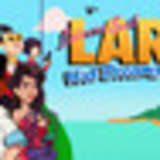