The LEGO video game franchise is now one of the biggest in the history of video games.

Warner Bros. announced today that it has now sold over 100 million units of LEGO franchise games to date, making the brick-themed franchise one of the biggest in the history of video games.

There are only a handful of gaming franchises that have crossed 100 million units sold. In reaching that mark the LEGO series joins household names like Mario, Pokemon, Need for Speed, Final Fantasy, Grand Theft Auto, and FIFA, among others.

LEGO games date back to the 1990s, but the licensed titles that you're likely most familiar with began in 2005 with the original LEGO Star Wars. Since then, Warner Bros. has made LEGO games based on blockbuster franchises like Harry Potter, Pirates of the Caribbean, Indiana Jones, The Lord of the Rings, The Hobbit, and Rock Band. 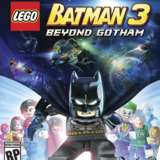