The next racing game based on the popular Lego modular construction toys will soon arrive in stores.

Lego Media International has announced that its latest racing game, Lego Racers 2, is on its way to stores. The game builds on the previous Lego Racers game by adding a story-based scenario in which players race to improve their skills and vehicles before taking on the final competitor, Rocket Racer. The new game features an improved graphics engine and a variety of new Lego worlds based on popular Lego themes.

As in the previous game, players can build their car and driver figure using virtual Lego pieces. In addition, cars can break into their individual pieces upon impact, and they must be reassembled at a pit stop. The game includes four worlds based on Lego themes: Life on Mars, Adventures: Dino Island, Arctic, and City Center. Each world has a unique boss to race against at the end. The game also features 24 new tracks, some with movable barriers.

The PC and Sony PlayStation 2 versions of Lego Racers 2 were developed by Attention to Detail, and they will soon be available in stores. A Nintendo Game Boy Advance version of the game is in development at Pocket Studios and is scheduled for release in November. Lego Racers 2 for the PC has a suggested retail price of $19.99. For more information, take a look at our full review of the original Lego Racers game. 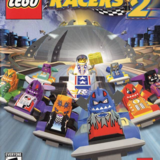