Lego: Pirates of the Caribbean sets sail in 2011

The game will let players control 70 characters through 20 levels, and it will also sport a cooperative mode, where two players can plunder and loot together. Additionally, the title includes a Freeplay mode, where players can return to previously beaten levels to collect items. 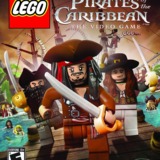 LEGO Pirates of the Caribbean: The Video Game
Follow
$50.00 on Amazon
Buy

View Comments (97)
LEGO Pirates of the Caribbean: The Video Game